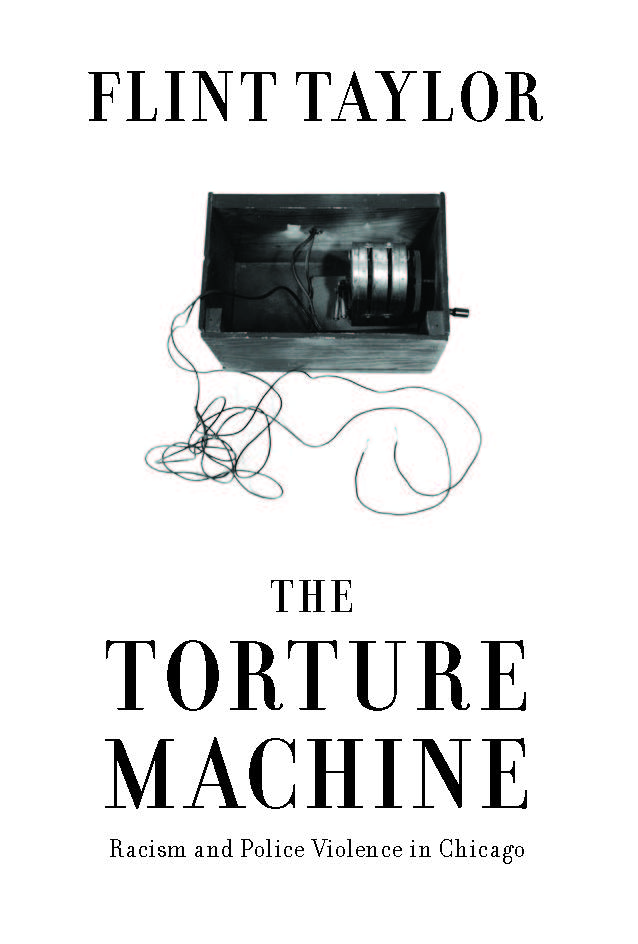 THE TORTURE MACHINE
Racism and Police Violence in Chicago

READ: Uncovering the Truth About a Raid on the Black Panthers (LitHub, Feb, 2019)

With his colleagues at the People’s Law Office (PLO), Taylor has argued landmark civil rights cases that have exposed corruption and cover-ups within the Chicago Police Department (CPD) and throughout the city’s corrupt political machine.

The Torture Machine takes the reader from the 1969 murders of Black Panther Party chairman Fred Hampton and Panther Mark Clark—and the historic, thirteen-years of litigation that followed—through the dogged pursuit of commander Jon Burge, the leader of a torture ring within the CPD that used barbaric methods, including electric shock, to elicit false confessions from suspects.

Joining forces with community activists, torture survivors and their families, other lawyers, and local reporters, Taylor and the PLO gathered evidence from multiple cases to bring suit against the CPD officers and the City of Chicago. As the struggle expanded beyond the torture scandal to the ultimately successful campaign to end the death penalty in Illinois, and obtained reparations for many of the torture survivors, it set human rights precedents that have since been adopted across the United States

“a riveting account…a forensic analysis of decades of collusion between judges, politicians, prosecutors and the police to engage in systemic human rights violations.”

“In this compelling book, Taylor details the high-profile Black Panther case and the 31 years the PLO pursued another notorious situation, the use of torture by Chicago police to secure false confessions. The legal pursuit of Chicago police detective Jon Burge and his accomplices crossed paths with the ambitions of Chicago politicians, including mayors Jane Byrne and Richard M. Daley. Taylor chronicles the winding course of the investigation and prosecution, including conflicts with a biased judge, surreptitious help from a police officer PLO dubbed Deep Badge, and the unveiling of the police practice of “street files,” unofficial reports not made available to defense attorneys as required by the U.S. Constitution, files that might have exonerated the accused. Through a long series of attempts in a quest that gathered more and more accusers, the PLO steadily built a case that ultimately triumphed with numerous exonerations and a far-reaching influence on international human rights.”

“Taylor’s The Torture Machine is a sad but necessary reminder of how citizens can be victimized by those who are supposed to protect them and how that abuse can poison entire neighborhoods. But it is also a story of a hard-won hope that resulted in some degree of justice for victims and an effort to remind children of what once happened in the hope that it won’t be repeated. The book is a chronicle of tenacity and hope alongside brutality and injustice, and in that way it is a profoundly Chicago story.”

“‘The Torture Machine offers a critical piece of Chicago history. Written in a straightforward style by someone on the front lines of a 50-year fight, the book recounts the courageous persistence of both the lawyers fighting for victims of state-sanctioned abuse and the victims themselves, who had to replay the worst moments of their lives over and over in court proceedings…The story of state-sponsored crimes in Chicago is powerful enough without embellishment, and Taylor lets it speak for itself. It’s a terrifying tale of justice lost, and eventually found.”

“[A] harrowing tale of the author’s 13-year crusade with the PLO….Sparing no details, Taylor reveals the police force’s reign of terror and the Gestapo-like interrogation tactics administered by Lt. Jon Burge and his squad of ‘confederates.’ Taylor illuminates in graphic detail the scars caused by some of the worst elements of law enforcement in a city perpetually beset by violence.”

“The Torture Machine describes the action and the drama. It takes us inside the lawyer’s mind in many momentous civil rights cases. It shows the dedication, ingenuity, strategic thoughtfulness, and persistence shown by its author and his colleagues in the People’s Law Office, in the face of concerted state resistance, for so many years, with such outstanding results. Truly, he has vindicated—as have others—the audacity shown fifty years ago, when with some trepidation, he and his youthful cohorts, including the reviewers here, determined to call themselves The People’s Law Office, and set about trying to live up to that name. Flint Taylor has done it, beyond measure, and the proof is here.”

“Flint Taylor’s searing memoir is a chilling reminder of American law enforcement’s enduring commitment to silencing black voices and torturing black bodies in the name of “order.” It is also a most powerful and moving account of the courageous community members, activists, and movement lawyers who have given their lives to make sure that those same voices are heard, and that some measure of justice can be had. From the moment, fifty years ago, when law enforcement murdered 21-year-old Fred Hampton as he slept in bed, to the more recent fight to hold Jon Burge and the Chicago PD accountable for brutalizing hundreds of people in their custody over the last thirty years, Torture Machine is essential reading for all who care about this country—past and future.”

Heather Ann Thompson, Pulitzer Prize winning author of Blood in the Water: The Attica Prison Uprising of 1971 and its Legacy

“If it was not for Flint Taylor I would still be languishing in prison. He brought hope to a hopeless place.”

“If you want to understand what actually happened to those Jon Burge tortured read this book.”

Flint Taylor is a founding partner of the People’s Law Office in Chicago. He is one of the lawyers for the families of slain Black Panther leaders Fred Hampton and Mark Clark and has represented many survivors of Chicago police torture over the past thirty-one years. Taylor was also trial counsel in the landmark civil rights case against the KKK, Nazis, and Greensboro, North Carolina police for the 1979 murder of five anti-Klan demonstrators. A lawyer for the people, Taylor has spent nearly fifty years fighting for justice, from the courtrooms of Cook County to the US Supreme Court.