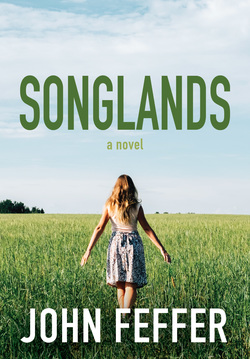 In Songlands, the stand alone finale to the Splinterlands trilogy, a poet and an AI launch a secret mission to rebuild the international community.

2052. The world is a mess. The climate change meltdown has triggered an endless cycle of natural disasters. Nationalist paramilitaries battle against religious extremists. Multinational corporations, with their own security forces, have replaced global institutions as the only real power-brokers. Waves of pandemics have closed borders with such regularity that travelhas become mostly virtual.

Aurora, a middle-aged sociologist, tries not to think about how the world has turned so chaotic and dangerous. At university, she focuses on her students. At home, it’s her children. She devotes her spare time to writing poetry. She’s relatively comfortable, but not particularly happy. And she’s angry at how small her life has become.Then one day a strange woman walks into Aurora’s life and, in an instant, the world’s chaos gets personal. Suddenly the obscure professor has a target on her back and the fate of the world in her hands. Her salvation, and that of the planet as well, lies in the mysteries locked inside the head of this enigmatic woman who has appeared on her doorstep. Unlocking those mysteries will take Aurora on a virtual journey around the fragmented globe and up against the world’s most powerful corporation.

Songlands, the stand-alone finale to the Splinterlands trilogy, describes humanity’s last shot at solving the world’s problems. Can Aurora assemble a team to reverse the splintering of the international community and avert an even more dystopian future?

John Feffer is a playwright and the author of several books. He is the director of Foreign Policy In Focus at the Institute for Policy Studies.