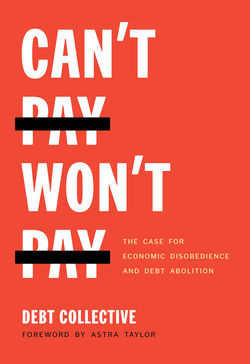 A Powerful Guide to Action for People in Debt.

Debtors have been mocked, scolded and lied to for decades. We have been told that it is perfectly normal to go into debt to get medical care, to go to school, or even to pay for our own incarceration. We’ve been told there is no way to change an economy that pushes the majority of people into debt while a small minority hoard wealth and power.

The coronavirus pandemic has revealed that mass indebtedness and extreme inequality are a political choice. In the early days of the crisis, elected officials drew up plans to spend trillions of dollars. The only question was: where would the money go and who would benefit from the bailout?

The truth is that there has never been a lack of money for things like housing, education and health care. Millions of people never needed to be forced into debt for those things in the first place.

Armed with this knowledge, a militant debtors movement has the potential to rewrite the contract and assure that no one has to mortgage their future to survive.

Debtors of the world must unite. Through tactics such as strikes and collective bargaining, debtors’ movements can help redress our country’s foundations in racial capitalism and environmental destruction. As isolated individuals, debtors have little influence. But as a bloc, we can leverage our debts and devise new, powerful strategies to challenge the corporate creditor class and help win reparative, universal public goods.

Individually, our debts overwhelm us. But together, our debts can make us powerful.

“Can’t Pay Won’t Pay will help higher education librarians understand the conditions under which their students are laboring, as well as illuminating both the personal and systemic positions of librarians themselves.”

“The Debt Collective has given us a visionary roadmap for forming an army of debtors that is powerful enough to make capital scream.”

“The Debt Collective’s Student Debt Strike is an important campaign to help build the mass movement we need to resist and abolish student debt.”

“This book explains why we are overdue for a debt revolution and, more importantly, how to do it. To abolish debt is to begin to rebuild society. We need to start doing so now.”

“Defusing explosive debts and undermining the legitimacy of the punitive, profitable debt system of the current United States is insurrectionary work, and uniting debtors in common cause is solidarity and justice work. This anticapitalist manual is a beautiful guide to how and why to do all those things.”

“The Debt Collective turns a sense of entrapment into a collective call for liberation.”

“’By prioritizing redress and repair, we can win free and universal education, housing, and healthcare. No one should have to go into debt to meet their basic needs,’ Debt Collective declares in this urgent book, which lays out concrete strategies and a powerful vision for radical change.”

“Can’t Pay, Won’t Pay is a clear, readable, and hugely powerful account of debt resistance in the age of financialized capitalism. Debt Collective brilliantly summarizes the contradictions of debt-fueled growth, and demonstrates how ordinary people can work together to resist it. Can’t Pay, Won’t Pay is the bible of debt resistance—a must-read for activists and academics alike.”

“This timely and outstanding book demonstrates the many predatory ways that debt stifles mobility for the most economically vulnerable. Fortunately it does not conclude there, but presents a political pathway. Through solidarity and collective action, debtor unions can forge a new economy that prioritizes finance working for all people, rather than our most vulnerable working for finance.”

Darrick Hamilton, Executive Director of the Kirwan Institute for the Study of Race and Ethnicity at Ohio State University

Astra Taylor is a filmmaker, author, and activist. She is the author of The People’s Platform: Taking Back Power and Culture in the Digital Age and Democracy May Not Exist, But We’ll Miss It When It’s Gone.