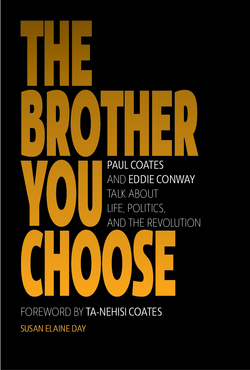 THE BROTHER YOU CHOOSE:
Paul Coates and Eddie Conway Talk About Life, Politics, and The Revolution

In 1971, Eddie Conway, Lieutenant of Security for the Baltimore chapter of the Black Panther Party, was convicted of murdering a police officer and sentenced to life plus thirty years behind bars. Paul Coates was a community worker at the time and didn’t know Eddie well – the little he knew, he didn’t much like. But Paul was dead certain that Eddie’s charges were bogus. He vowed never to leave Eddie – and in so doing, changed the course of both their lives. For over forty-three years, as he raised a family and started a business, Paul visited Eddie in prison, often taking his kids with him. He and Eddie shared their lives and worked together on dozens of legal campaigns in hopes of gaining Eddie’s release. Paul’s founding of the Black Classic Press in 1978 was originally a way to get books to Eddie in prison. When, in 2014, Eddie finally walked out onto the streets of Baltimore, Paul Coates was there to greet him. Today, these two men remain rock-solid comrades and friends – each, the other’s chosen brother.

When Eddie and Paul met in the Baltimore Panther Party, they were in their early twenties. They are now into their seventies. This book is a record of their lives and their relationship, told in their own voices. Paul and Eddie talk about their individual stories, their work, their politics, and their immeasurable bond.

“A landmark book for anyone who wants to understand the deep connectivity of Black America.  It provides a ringside seat to the bruising fight for Civil Rights with two men, Eddie Conway and Paul Coates, as they provide necessary lessons on politics, change, community and enduring bonds.  Their journey together and their hard-earned insights span nearly fifty years of seismic change in America. It’s a lesson in loyalty, commitment under fire, and what we can all do to make America keep its promise.”

“The Brother You Choose is a powerful addition to the rich collection of Panther autobiographies. Former political prisoner Eddie Conway and Black Classic Press founder Paul Coates have worked with radical journalist Susie Day to craft a beautiful dialogue about their life trajectories through the military, the Baltimore chapter of the Black Panther Party, the prison system and the ongoing struggle for Black Liberation. Their narrative moves the BPP’s center of gravity from the Oakland leadership to explore the very different dynamics in the East Coast in which the Panthers emerged from dense black communities in cities like New York, Philadelphia and Baltimore. There is so much to be learned here about the BPP, the Black Liberation Army, the effects of state repression and the role of political education and publishing in the fight for freedom. I have read all of the Panther autobiographies and this is one of my favorites. The Brother You Chose is an ideal book to assign to undergraduates as well as for the larger reading public. Its elegant structure and powerful content speak directly to moment we face as the urban uprisings against state violence sweep cities across the US.”

Donna Murch, author of Living for the City: Education, Migration and the Rise of the Black Panther Party in Oakland, California

“Too often unheard above the sirens, the desperate gasping for breath, is the consistent language of love, of tenderness, of support between men. In this powerful offering, Paul Coates and Eddie Marshall Conway speak to us of the brutal harm visited upon Black people and they speak to us of revolution and freedom. But woven masterfully throughout the conversations shared is a life-giving narrative that recalls the history of a people who walked as much as 100 miles barefoot to find their families when slavery came to its bloodsoaked close. Brother You Choose, like the men who tell it, is a national treasure.”

“The Brother You Choose encompasses all that is embodied in the soul of Gwendolyn Brooks’ words when she writes: “we are each others harvest; we are each others business; we are each others magnitude and bond.” This unique friendship (i.e., brotherhood) born under the early idealism of the Black Panther Party within its stated goals and objectives bring smiles to one who has also struggled on the same streets as Paul Coates and Eddie Conway. Susie Day has provided us with an insight into two lives that have survived and developed within the deadly American history that challenges us daily. The relationship that develops between the pages of these brothers’ lives is reflective of true heart and soul. The inimitable brotherhood chronicled here can only be measured by the depth of one’s own sense of grace and humanity. Over a span of fifty years, Paul Coates and Marshall “Eddie” Conway have remained “rock-solid comrades” and extended family in the Black Empowerment struggle. Their friendship exemplified the early promise of the BPP and its core meaning as articulated in the Ten-Point Program illustrated through Day’s poignant account of racial injustice, resistance and unyielding solidarity.”

“Susie Day and the men who share their stories with her, Conway and Coates, have produced a jewel of oral history. Put it alongside Studs Terkel’s Working. Here are voices intimate, every-day, world historical, all at once. Here is life — the texture of thought, work, commitment, love: “Just that simple. Just that complicated.” It is a personal/political history that is deep, and funny, and tragic, and radically astute. And it is absolutely necessary. Here is a book that will not wear out.

JoAnn Wypijewski, author What We Don’t Talk About When We Talk About #MeToo: Essays on Sex, Authority & the Mess of Life

“Beautifully edited and narrated by Susie Day, The Brother You Choose allows us to eavesdrop on a humor-filled, heartwarming conversation between Eddie Conway and Paul Coates, whose love for each other and for their people carried them through revolutionary struggles and decades of wrongful imprisonment. An engaging read, these deeply personal perspectives on a common journey toward Black liberation encapsulate a history critical to movement-building today.”

“By turns touching, enraging, moving, tough, and tender, always riveting and ultimately inspiring, The Brother You Choose underscores the essential truth embodied in Che Guevara’s observation that “the true revolutionary is guided by a great feeling of love.”

“My beloved comrade brothers, Eddie Conway & Paul Coates both connected together like Siamese twins for over forty-three years both with unflinching self determination and unconditional brotherly love and appreciation for the others humanity. Eddie’s confined in maximum security prison(s) while Paul navigates minimum security the world we all live in informing and educating the world to “FREE EDDIE CONWAY. What an amazing story of triumph over a system of wicked injustice behavior.”

“With a dramatist’s eye and a radical’s heart, Susie Day has crafted a conversation between two titans about fighting the good fight, enduring the hard stuff, and living to tell about it. The Brother You Choose is smart, endearing, funny and inspiring. Paul Coates and Eddie Conway reflect on commitment to the world and to each other. Pull up a chair and have a listen.”

Susie Day began listening to people in prison at the DC Jail, where she interviewed four women charged with the 1985 bombing of the U.S. Capitol. She lives in Manhattan with her partner (and Capitol-bomber), Laura Whitehorn.