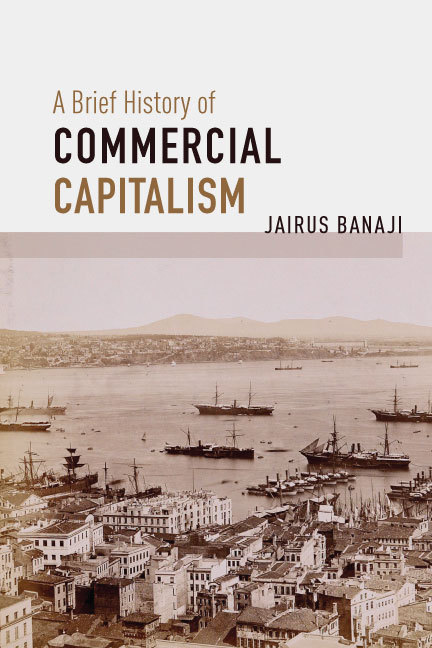 A BRIEF HISTORY OF COMMERCIAL CAPITALISM

The rise of capitalism to global dominance is still largely associated – by both laypeople and Marxist historians – with the industrial capitalism that made its decisive breakthrough in 18th century Britain. Jairus Banaji’s new work reaches back centuries and traverses vast distances to argue that this leap was preceded by a long era of distinct “commercial capitalism”, which reorganised labor and production on a world scale to a degree hitherto rarely appreciated.

Rather than a picture centred solely on Europe, we enter a diverse and vibrant world. Banaji reveals the cantons of Muslim merchants trading in Guangzhou since the eighth century, the 3,000 European traders recorded in Alexandria in 1216, the Genoese, Venetians and Spanish Jews battling for commercial dominance of Constantinople and later Istanbul. We are left with a rich and global portrait of a world constantly in motion, tied together and increasingly dominated by a pre-industrial capitalism. The rise of Europe to world domination, in this view, has nothing to do with any unique genius, but rather a distinct fusion of commercial capitalism with state power.

Praise for Theory as History

“From the impact of slavery, the rise of the poor taking control, and the role of other philosophies and faiths impacting the discussion, Theory as History is a unique way to discuss history, economics, and the people behind it, a core addition to any community library history collection.”

“The great merit of this volume is that it establishes an approach for [the debates about the nature and origin of capitalism] that is deeply theoretical, but at the same time refreshingly unhampered by the kind of doctrinaire attachment to a perceived (and often misread) orthodoxy that plagued so much of “historical materialism” for the past century. It is scholarly, without being purely academic … Banaji’s book deserves to be read and debated as one of the starting points for a new wave of Marxist historiography, still in the process of liberating itself from the ghost of its formalist past.” ”

“Banaji’s seemingly idiosyncratic but in fact highly sophisticated and original approach to historical analysis provides not only a welcome stimulus and a challenge for scholars today, but also will give them plenty to think about for many years to come.” ”

“Theory as History is a book written at the summit of a lifetime’s engagement with issues of Marxist theory and practice … Banaji’s work demonstrates that no aspect of human history is irrelevant to the present. His scholarship shows immense skill, depth and range … [proving] it is not the Marxist method that has been at fault, but the dominance of non-Marxist theory and method in the minds of Marxist.”

Jairus Banaji spent most of his academic life at Oxford. He has been a Research Associate in the Department of Development Studies, SOAS, University of London, for the past several years. He is the author of Agrarian Change in Late Antiquity (Oxford, 2007), Theory as History (Haymarket Books, 2011) — for which he won the prestigious Isaac and Tamara Deutsche Memorial Prize — and numerous other volumes and articles.