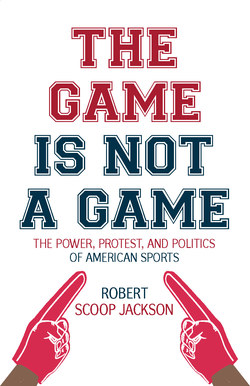 THE GAME IS NOT A GAME
The Power, Protest and Politics of American Sports

Part theory, part op-ed, The Game is Not a Game, is an affecting, sobering and unflinching examination of the good and evil of the sports industry. Both liberating and provocative, Jackson explores the role sports play in American society and also the hypocritical standards, which the athletes that play them are often judged.

The Game is Not a Game is not intended to be a “safe space.” It breaks the typical sports literary format and rules, challenging accepted ideology, and pushing the comfort zones and boundaries of mainstream sports media. Chapters explore “America’s Miseducation of LeBron James;” “The Disrespect of Serena Williams’ G.O.A.T.ness;” the duplicity of the NFL with the plight of Colin Kaepernick; the cultural bias of analytics; the power of social activism verses the power and politics of professional sports ownership− from the perspective of a writer considered one of the leading voices of social, political and racial activism in sports media

“Jackson’s work is not about scores; rather, he stresses that sports are a self-contained microcosm of society at large. A thought-provoking, unfailingly insightful book.”

“Only the legendary sports writer Robert “Scoop” Jackson could write The Game is Not a Game — a book that bristles with bracing and brutal insights that take no tea for the fever and offer no discount on truth or justice. Because he is a master of deep theory (who else could translate Michele Foucault’s notion that power doesn’t just hibernate in places of legitimacy but breaks out everywhere between all folk and situations), because he flings street vernacular like a grammatical drug dealer, because he is a savant of the history of sports in America, this book is an instant classic that reckons with the factors that make sports possible, and at the same time wrestles with the forces that make protest in sports necessary. The Game is Not a Game is intersectional cultural analysis at its best!”

“Candid, riveting, informative — yet not surprising at all. This is Scoop Jackson we’re talking about, so I expected nothing less. If you care about the sports industry……..if you value a true, authentic, perspective on the world of sports — and about its participants — you’ve come to the right place. This is a treat for anyone who loves sports.”

“To do this work of…talking candidly about race and sports, you have to realize that it’s supposed to get a little messy.” In a conversation with the author, journalist Jemele Hill hits on just the thing that makes The Game Is Not A Game so special: Scoop Jackson is never afraid to get messy. Jackson doesn’t avoid the static, he steps into it, pushing even the most woke minds to dig deeper into and think more honestly about issues of race, gender and politics. From the NCAA to LeBron James, Serena Williams to Colin Kaepernick, Jackson uses the biggest headlines of our day to reveal that the power of sports to change the world can only be realized if the powers that run sports allow it.”

“I’ve long said that Scoop Jackson is the Coltrane of the sports page. With The Game is Not a Game he takes his skillset to a level few sportswriters – or any writers – can match. Scoop is that rarest of commodities: an original voice.”

“This is the book we’ve been expecting from Scoop Jackson, one of the most insightful sports journalists of our generation. With humor and brutal honesty, Scoop pulls the covers off the sports industry and the blinders off those who enable its hypocrisy.”

“Scoop’s contribution to sports journalism in the last three decades is unparalleled, and incomparable. This leap into critical literature is not only welcomed, but crucial …”