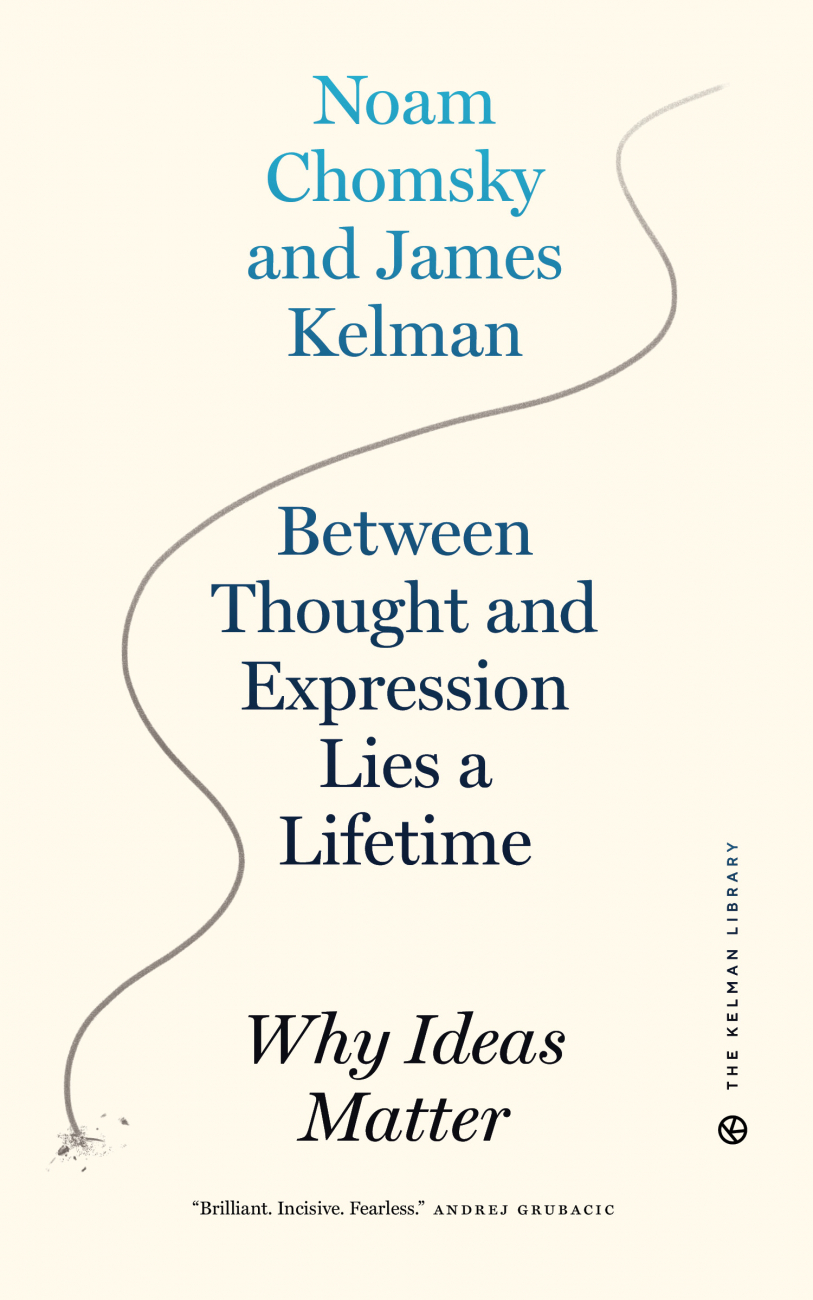 BETWEEN THOUGHT AND EXPRESSION LIES A LIFETIME
Why Ideas Matter

This exhilarating collection of essays, interviews, and correspondence—spanning the years 1988 through 2018, and reaching back a decade more—is about the simple concept that ideas matter. They mutate, inform, create fuel for thought, and inspire actions.<.p>

As Kelman says, the State relies on our suffocation, that we cannot hope to learn “the truth. But whether we can or not is beside the point. We must grasp the nettle, we assume control and go forward.”

Between Thought and Expression Lies a Lifetime is an impassioned, elucidating, and often humorous collaboration. Philosophical and intimate, it is a call to ponder, imagine, explore, and act.

“The real reason Kelman, despite his stature and reputation, remains something of a literary outsider is not, I suspect, so much that great, radical Modernist writers aren’t supposed to come from working-class Glasgow, as that great, radical Modernist writers are supposed to be dead. Dead, and wrapped up in a Penguin Classic: that’s when it’s safe to regret that their work was underappreciated or misunderstood (or how little they were paid) in their lifetimes. You can write what you like about Beckett or Kafka and know they’re not going to come round and tell you you’re talking nonsense, or confound your expectations with a new work. Kelman is still alive, still writing great books, climbing.”

“A true original . . . A real artist. . . . It’s now very difficult to see which of his peers can seriously be ranked alongside [Kelman] without ironic eyebrows being raised.”

“Probably the most influential novelist of the post-war period.”

“Kelman has the knack, maybe more than anyone since Joyce, of fixing in his writing the lyricism of ordinary people’s speech . . . Pure aesthete, undaunted democrat—somehow Kelman manages to reconcile his two halves.”

“Kelman has always been a true and honest writer; which is why he is one of the fairly few who really matter.”

Noam Chomsky is a laureate professor at the University of Arizona and professor emeritus in the MIT Department of Linguistics and Philosophy. His work is widely credited with having revolutionized the field of modern linguistics, and Chomsky is one of the foremost critics of U.S. foreign policy. He has published numerous groundbreaking books, articles, and essays on global politics, history, and linguistics. His recent books include Who Rules the World? and Hopes and Prospects.

James Kelman is a Scottish novelist, short story writer, playwright, and essayist whose many literary awards include the Booker and James Tait Black prizes. He was born in Glasgow in 1946 and left school in 1961, moving around and passing through Los Angeles for a brief period in the mid-1960s then in various jobs in various places in England. He started writing at the age of twenty-two: ramblings, musings, sundry phantasmagoria, stories, whatever. In 1969 while working in London he met and married Marie Connors from South Wales. They settled in Glasgow, where he has lived as writer, father, and grandfather. Kelman has been a vocal supporter of the Kurdish people and campaigns regularly with Scottish Solidarity with Kurdistan. For further information go to jameskelman.net.