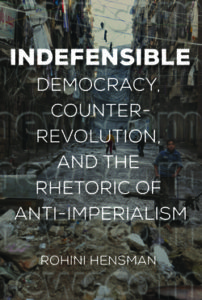 INDEFENSIBLE:
Democracy, Counter-Revolution, and the Rhetoric of Anti-Imperialism

Indefensible offers an essential alternative to the ideology of those who claim to be anti-imperialists but oppose only Western imperialism and the despots it supports. Instead of ignoring or even supporting other imperialist nations like Russia and defending dictators such as Bashar al-Assad in Syria, Hensman takes on the question of how we got here, using important case studies of conflicts such as those in Russia, Syria, Iraq, Iran, Ukraine, and Bosnia.

Indefensible powerfully argues for a genuine internationalism that supports mass struggles for freedom and democracy, no matter what regime they are fighting against, and suggests steps that can be taken to promote democracy, end the ongoing violence, and promote human rights.

“If you want to understand how to be a principled internationalist in the era of imperialism, read this book.”

Anand Gopal, author of No Good Men Among the Living: America, the Taliban, and the War Through Afghan Eyes

“Brushing off all sorts of dogmatic beliefs, [Hensman] does not shy away from thinking out of the box, guided only by her uncompromising dedication to the values of human rights and democracy.”

“Indefensible is powerful book that will provoke much debate—as it should. It is a vital contribution to building an anti-imperialism that opposes all oppression of one nation by another.”

David McNally, author of Monsters of the Market: Zombies, Vampires, and Global Capitalism

“Hensman argues powerfully for a principled and enduring struggle against any form of authoritarianism and inequality in civil society, whether West, East, North, or South. I hope that her work will be widely read and discussed.”

Rohini Hensman is a writer, independent scholar and activist working on workers’ rights, feminism, minority rights, and globalization. She has been published extensively on these issues, her most recent book being Workers, Unions, and Global Capitalism: Lessons from India.