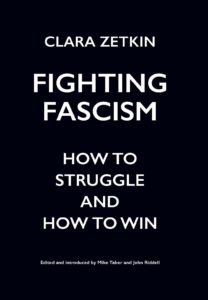 FIGHTING FASCISM
How to Struggle and How to Win

Edited and introduced by Mike Taber and John Riddell

The increased visibility of fascist and far-right organizations in the United States and elsewhere is sparking keen interest among a new generation. Important questions are posed: What is fascism? Why is it such a deadly threat? How can it be fought? How should it be fought?

In 1923, fascism was a new phenomenon, having come to power in Italy only the previous year. In the face of widespread uncertainty and confusion, German Marxist Clara Zetkin explained the nature of this new danger, proposing a sweeping plan for the unity of all victims of capitalism to counter the fascist threat.

Clara Zetkin (1857-1933) was a German Marxist leader, and a close collaborator of Rosa Luxemburg. An advocate for women’s rights, she initiated the first International Women’s Day in 1911. In the decade after 1923 she sought to organize a united front of struggle against the rise of Nazism.

Mike Taber is a longtime socialist activist and editor. He has edited or prepared dozens of books on the history of the revolutionary and working-class movement, including books by Leon Trotsky, V. I. Lenin, Malcolm X, James P. Cannon, Che Guevara, and Maurice Bishop. He currently lives in Chicago.

John Riddell has translated and edited seven volumes of documents of the Communist movement in the era of the Russian revolution. Two further Brill volumes now in preparation will complete this ambitious project.