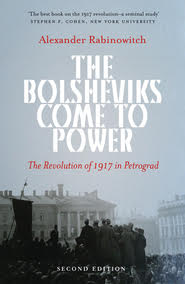 In the months following the collapse of the tsarist regime in war-torn Russia, the Bolshevik Party emerged from obscurity to overthrow the Provisional Government and establish the world’s first communist government.

Marking the centenary of the Russian Revolution with a new introduction by the author, historian Alexander Rabinowitch refutes the Soviet myth that the party’s triumph in the October revolution was inevitable. In The Bolsheviks Come to Power, he challenges the long-held view of many Western historians that the Bolsheviks won primarily because of their unity, discipline, and responsiveness to Lenin’s revolutionary leadership. Exploring the changing situation and aspirations of workers, soldiers, and Baltic fleet sailors in Petrograd, Rabinowitch’s classic account reveals the critical link between the party’s revolutionary tactics and the Petrograd masses.

This new edition, published on the occasion of the centenary of the Russian Revolution, features a new foreword by Rabinowitch.

“The best volume on the Russian Revolution in years … What is so valuable about the book is that it undoes both rigid stereotypes: that Leninism is inherently and always ‘correct’, pointing straight toward revolutionary triumph, and that of Leninism as always rigidly authoritarian, pointing straight toward dictatorship. A first-rate piece of work.”

“Alexander Rabinowitch … has written what is perhaps the fullest and most reliable account of the Bolshevik seizure of power currently available in English … Based on a solid command of the sources, it is scholarly and well documented yet accessible to the general reader, with its clear and vigorous style and interesting illustrations … Should be read by every person interested in the Russian Revolution.”

“The Bolsheviks Come to Power remains the best book on the 1917 Russian Revolution — a seminal study of events that shaped history for decades and continues to do so even today. Both political and social history, it greatly expands on our detailed knowledge of the turbulent events of that year, while deepening and revising our understanding of the Bolshevik Party and the social factors that brought it to power.”

“[A] brilliant, convincing, and exciting book.”

“Essential reading … told with a narrative skill which all too few historians could match.”

“[Rabinowitch] draws together the sequence of events in Petrograd, the mass moods there, and the role of the party, all the while demonstrating the reciprocal effects of each set of factors on one another. … [A] vivid picture of politics in 1917.”

“Five crucial months in the history of the Russian Revolution are portrayed here with a wealth of new data. The Bolsheviks, lifting themselves up from a seemingly fatal slump in their fortunes in July 1917, moved to their successful bid for power in October…. Quite a number of preconceptions are dispelled in this work by Rabinowitch…. We see the Bolsheviks in action-debating, hesitating, deeply disagreeing on policies, fiercely contesting Lenin’s ideas—a far cry from the monolithic avant-garde some writers still believe the Party to have been.”

“Notable… for its soundness of judgment, clarity of expression, and wealth of illuminating detail. Our understanding of what happened in 1917 has been significantly enhanced by Rabinowitch’s careful research. The Bolsheviks Come to Power should be read by every person interested in the Russian Revolution.”

“Rabinowitch comes to several conclusions: First, the Bolshevik program of land, peace, and bread had widespread support among the masses; he states that ‘as a result, in October the goals of the Bolsheviks, as the masses understood them, had strong popular support’…. Second, the Bolshevik program achieved this popularity precisely because of the inability-or lack of desire-of other political parties to respond to these demands. Third, moderate socialist parties’ continued support of Kerensky and the Provisional Government undermined their credibility in the eyes of the masses. And fourth, ‘In Petrograd in 1917 the Bolshevik Party bore little resemblance to the by-and-large united, authoritarian, conspiratorial organization effectively controlled by Lenin depicted in most existing accounts’…; rather, the party was successful precisely because it was flexible and responsive to the moods of the populace, and Rabinowitch ‘would emphasize the party’s internally relatively democratic, tolerant, and decentralized structure and method of operation, as well as its essentially open and mass character.’”

Alexander Rabinowitch is Professor Emeritus of Russian history at Indiana University, author of Prelude to Revolution: The Petrograd Bolsheviks and the July 1917 Uprising, and coeditor of Russia in the Era of NEP. His many seminal essays on the history of the revolutionary period have appeared in the United States, Russia, and Europe.