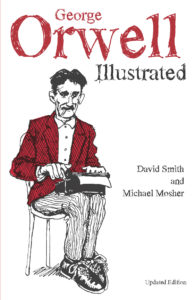 George Orwell is one of the most celebrated of all 20th-century literary figures, yet he is frequently misunderstood, largely because his expositors have seldom fully grasped his sophisticated left-wing anti-Stalinism. This illustrated narrative is uniquely accessible and provides the insight needed to understand Orwell, with the same kind of light touch that Orwell himself adored.

“An outstanding introduction of George Orwell’s politics that has certainly stood the test of time, and the artwork is tremendous.”

David Smith is editing Marx’s notes on globalization and non-Western cultures for Yale University Press. The author of Marx’s Capital Illustrated (Haymarket, 2014, illustrated by Phil Evans), Smith is a professor and department chair at the University of Kansas.