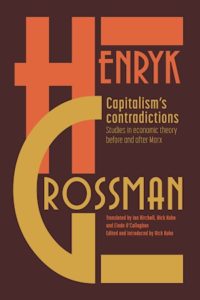 Studies of Economic Thought Before and After Marx

Translated and introduced by Rick Kuhn

Henryk Grossman was one of the best-known and most influential Marxist economists of the 20th century, and yet most of his work remains unavailable to English-speaking audiences. His most famous book, The Law of Accumulation and Breakdown of the Capitalist System, written while Grossman was a member of the illustrious Frankfurt School, has been a point of reference for several generations of revolutionaries discontent with both Keynesian and Stalinist claims about Capitalism’s stability.

This volume, collected and introduced by Deutscher Prize winning Grossman biographer Rick Kuhn, assembles several of the Galician Marxist’s most important essays, and serves as an accessible introduction to his project of recovering’ Marx. Throughout the collection, Grossman highlights distinctive features of Marx’s economic theory by contrasting it with the views of his forerunners, from Adam Smith to Jean Charles Sismondi. He then moves on to show how many Marxist economists import faulty assumptions from mainstream economics into their analyses, and in the process provides a unique overview of the major debates among Marxists over politics and economics between Marx’s death and the rise of Fascism in Germany.

Rick Kuhn’s invaluable introduction provides vital context for understanding the development of Grossman’s ideas and makes the case for their continued relevance to contemporary activists.

Henryk Grossman (1881–1950) was the most important Marxist economist of the 20th Century. He was a founding leader of the Jewish Social Democratic Party of Galicia and later a member of the Polish Communist Workers Party. After holding posts as a senior public servant and professor in Poland, he was a member of the Institute for Social Research in Germany and, following the Nazi takeover, in exile.

Dr Rick Kuhn is an honorary associate professor in Sociology at the Australian National University and long term socialist activist, who has written extensively on Marxist theory as well as Australian politics and political economy. His Henryk Grossman and the Recovery of Marxism won the 2007 Deutscher Prize.