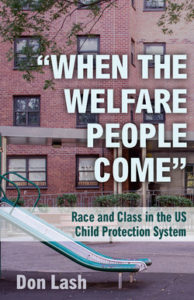 Malcolm X, describing his childhood experience of “when the welfare people came” and introduced him to the US child protection system, called it “legal, modern slavery—however kindly intentioned.” That shocking characterization obscures some of the complexities of the state response to childhood poverty, but it reflects sentiments that are common among communities of color, where child welfare investigations are most concentrated. A radical assessment of institutional racism in the child welfare system is needed now more than ever.

In this sweeping look at the history and politics of the US child welfare system, “When the Welfare People Come” exposes the system—from the “orphan trains” and Indian boarding schools to current practices in child protective investigations, foster care, and mandated services—arguing that it constitutes a mechanism of control over poor and working-class parents and children. Don Lash reveals the system’s role in the regulation of family life under capitalism and details the deep and continuing consequences of what happens “when the welfare people come.” Including first-person vignettes of parents, children, and workers in the US child protection system, Lash also offers practical and cogent ideas for its improvement and transformation.

“This book’s description and analysis of child welfare is terrific. Though I’ve worked in the field of child welfare for four decades, I learned not only new information but also found new, resonant analyses. The book is best when describing the operations of the child welfare system in New York City and the nation both recently and historically. The book critiques the neo-conservative view that blames the individual and punishes the victims of societal racism and income inequality. It is equally harsh, perhaps more so, in its critique of neo-liberalism that also blames the individual and provides treatment as the remedy. The book is written from a neo-Marxist perspective. And since we’ve seen the failure of both neo-conservative and neo-liberal thinking, we would be well served to try a new paradigm presented in this book.”

“Lash’s excellent overview of the child welfare system makes a compelling case for its role in the maintenance of capitalism as a social system. He illuminates the various ways that child welfare plays both a practical and ideological role through intervening in families that struggle with poverty and the ravages of racism, sexism, ableism, and other forms of inequality. Most importantly, he provides a discussion of how to create true change, not through incremental reform, but through a radical questioning of how inequality itself creates harm for children and families and how all families can be supported.”

Don Lash is an attorney who has practiced in the areas of disability rights, education and child welfare for over 20 years. He worked within New York City’s Administration for Children’s Services for more than 8 years.