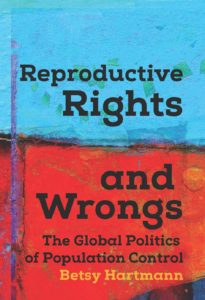 The Global Politics of Population Control

With a new preface, this feminist classic reveals the dangers of contemporary population-control tactics, especially for women in developing countries.

Reproductive Rights and Wrongs is an important gateway into the controversial topic of population for students, activists, researchers and policymakers. It challenges the myth of overpopulation, uncovering the deeper roots of poverty, environmental degradation and gender inequalities. With vivid case studies, it explores how population control programs came to be promoted by powerful governments, foundations and international agencies as an instrument of Cold War development and security policy. Mainly targeting poor women, these programs were designed to drive down birth rates as rapidly and cheaply as possible, with coercion often a matter of course. In the war on population growth, birth control was deployed as a weapon, rather than as a tool of reproductive choice.

Threaded throughout Reproductive Rights and Wrongs is the story of how international women’s health activists fought to reform population control and promote a new agenda of sexual and reproductive health and rights for all people. While their efforts bore fruit, many obstacles remain. On one side is the anti-choice movement that wants to deny women access not only to abortion, but to most methods of contraception. On the other is a resurgent, well-funded population control lobby that often obscures its motives with the language of women’s empowerment.

Despite declining birth rates worldwide—average global family size is now 2.5 children—overpopulation alarm is on the rise, tied now to the threats of climate change and terrorism. Reproductive Rights and Wrongs helps readers understand how these contemporary developments are rooted in the longer history and politics of population control. In the pages of this book a new generation of readers will find knowledge, argumentation and inspiration that will help in ongoing struggles to achieve reproductive rights and social, environmental, and gender justice.

“This is a book of conscience. Shocking, eloquent, carefully researched, it should be read—and acted upon.”

“This revised edition of a feminist classic adds new information on AIDS, contraception, and the anti-abortion movement as it probes world patterns of population and reproduction control and its meaning for the future. Rapid population growth is here linked to economic and social problems in chapters which provide strong keys to understanding world population patterns.”

“Stands out amid the rising tide of books on the population question. Hartmann’s critique of global special interests in population and the environment are must reading for students and policy analysts.”

Judy Norsigian and Norma Swenson, co-authors The New Our Bodies, Ourselves

“If I had time to read just one book to gain an understanding of the population and development link, this one would be it.”

“It is unusual to find such a clear explanation of the complex issues involved in population control in the modern world; Ms. Hartmann’s clarity can have come only from enormous work and deep understanding. This is a modern analysis which gives us hope.”

“At this juncture in history when victim blaming has become more blatant and oppressive, there is a need for voices of sanity. This book is such a voice. It reflects conviction, courage, sensitivity, and deep insight.”

Betsy Hartmann is a professor emerita of development studies and senior policy analyst of the Population and Development Program at Hampshire College in Amherst, Massachusetts. Her research, writing, teaching, and lecturing focus on the intersections between population, migration, environment, and security issues, and she is widely published in popular, policy, and scholarly venues. She is the author of Reproductive Rights and Wrongs: The Global Politics of Population Control and two political thrillers, Far Right, The Truth about Fire and Deadly Election. She is the co-author of A Quiet Violence: View from a Bangladesh Village, and co-editor of the anthology Making Threats: Biofears and Environmental Anxieties. In spring 2015 Hartmann was a Fulbright-Nehru Distinguished Chair in India, where she lectured and did research on Indian and international population policy. A long-standing activist in the international women’s health movement, she is known for her work to challenge and reform population policy and promote reproductive and environmental justice. She received her BA magna cum laude in South Asian Studies from Yale University and her PhD in Development Studies from the London School of Economics.

The America Syndrome: Apocalypse, War and Our Call to Greatness