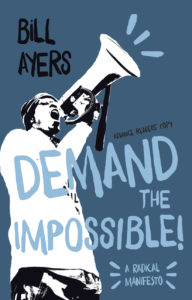 DEMAND THE IMPOSSIBLE!
A Radical Manifesto

Demand the Impossible is a manifesto for movement-makers and an invitation to join hands and make history together. In an era defined by mass incarceration, endless war, economic crisis, catastrophic environmental destruction, and a political system offering more of the same, radical social transformation has never been more urgent—or seemed more remote.

A manifesto for movement-makers in extraordinary times, Demand the Impossible! urges us to imagine a world beyond what this rotten system would have us believe is possible.

In critiquing the world around us, insurgent educator and activist Bill Ayers uncovers cracks in that system, raising the horizons for radical change, and envisioning strategies for building the movement we need to make a world worth living in.

“Demand the Impossible! is more than a book, more than a manifesto. It is a torch. Bill Ayers’ vision for a humane future is incendiary—fire that incinerates old logics and illuminates new paths. If we do not end the violence of militarism, materialism, caging, dispossession, debt, want, ignorance, and global warming, our very survival is impossible. Read aloud.”

“With the beautiful idealism of a young radical and the sage wisdom of an elder, Bill Ayers is making trouble again, and we should all be grateful. In Demand the Impossible! Ayers troubles the waters of staid political practices, insisting that we close our eyes for a moment and think creatively about what a better world might look like, and then open our eyes wide and organize boldly to make that world a reality. This is an elegant and provocative manifesto for our time, one that honors the social justice organizing currently in motion.”

“Bill Ayers has produced a portrait of two worlds. One is a dystopia, recognizable as the world in which we live, the other a world that capitalism describes as a fantasy—a world reconstructed around values that place the advancement of humanity and the sanctity of the planet above the accumulation of wealth and power. The two portraits stand in dramatic contrast and make Demand the Impossible! both illuminating and compelling. This manifesto is radical less in its rhetoric than in its daring to actually go to the roots of the barbarism of the capitalist system. Demand the Impossible! is to be read and then shared widely. It can serve as a motivator for those of us engaged in the long battle for justice and social transformation.”

“In his many years of practicing and theorizing pedagogy, Bill Ayers has proven himself a master teacher. Now, Demand the Impossible! is a brilliant and accessible distillation of techniques and knowledge crafted into a powerful manifesto for our times, expanding the horizon of our expectations.”

Roxanne Dunbar-Ortiz, author of An Indigenous Peoples’ History of the United States

“Bill Ayers is the philosopher of the revolutionary spirit. These are despondent times, and yet, as Bill muses – history can surprise us. In preparation for that surprise, Bill has written a smart and inspirational manifesto.”

“Bill Ayers’ Demand the Impossible! is a strong shot of inspiration for anyone searching for deep social transformation. It is a heartfelt, upbeat manifesto in favor of activism as an antidote to despair. Chock-full of personal stories, real facts and concrete examples packaged in exquisite writing, Demand the Impossible! will open your mind to possibilities you never thought existed. Ayers will get you off your seat and into the street, fist raised, heart full, reaching for the spectacular.”

Demand the Impossible! is just what the world needs right now, a manifesto that challenges us to imagine bigger, love harder, create more expansively, and struggle toward a liberatory future in spite of our deepest doubts. Bill Ayers wakes us up and shows us that even the most entrenched, most permanent-seeming institutions—the military, the prison, the police, capitalism itself—are no match for the creativity and determination of the “universal family” and the “better angels of ourselves.” Demand the Impossible! is a call to abandon the illusory American Dream wholesale, and, in its place, to unleash our own collective, revolutionary dreams into the universe. I dare you to not be inspired by this book.

Maya Schenwar, editor of Truthout and author of Locked Down, Locked Out

“This is a deeply refreshing book, reminding us of why the core principles of socialist and anarchist thought—peace, justice, freedom, equality—are grounded, not in utopian fantasy, but in the joyous work of the creative imagination in everyday life. In large ways (an end to the military-industrial complex and the U.S. prison system) and small (the rebirth of community and public life in neighborhoods) Ayers offers a program that is long on ideals and even longer on actually existing programs, groups, movements, and individuals working toward a humane future. By turns alarming in its realistic assessment of the madness and stupidity of the present global system, and inspiring in its down to earth proposals for alternative human futures, this is a must-read for discouraged progressives everywhere. It is a book that could be a clear and present danger to Western civilization as we know it—and in the very best way.”

“Every once in a while a book comes along that not only changes the way one thinks, but opens a new space for imagining and then acting to create a better world with commitment, courage, and a heightened sense of ethical and social responsibility. Demand the Impossible! is one of those books, and it ranks right at the top of the list. Ayers has a gift—he not only writes like a poet but he never fails to deal with rigorous and important ideas in an accessible and moving style. Touching on a range of issues extending from police violence and racism to ecological destruction, Ayers raises all the right questions and connects the dots that provide a tapestry for energizing the radical imagination. This may be one of the best books written in that tradition. Powerful, insightful, prodding, challenging, and most of all hopeful—if you want to understand the problems facing a society tipping into the abyss of authoritarianism, this book is a must-read, a kind of master text for those of us figuring out how to change a world that seems at time beyond our reach.”

Henry Giroux, author of Theory and Resistance in Education and The Violence of Organized Forgetting

“Demand the Impossible! provides the imperative we need now. As public consciousness and despair heighten in our various locales, we must be willing to engage lessons from the past and present while building a future that is reflective of our commitment to justice. If we’re serious about this, we know there is no choice: all we got is US!”

David Stovall, author of Born Out of Struggle

“Ever the educator and agitator, Ayers envisions a future society where the levers of power are pulled collectively by masses of active citizens working for the greater good and not, as he argues, for the benefits of the 1 percent and corporations. . . . The grand social visions of the 1960s are alive and well in Ayers’ call to action. Progressives will seek out this treatise.”

“The book is simply formatted and powerfully written. The problem and situation are clearly stated and the need for change made explicitly clear. Ideally, Demand the Impossible! would be distributed for free at every rally and meeting called to discuss the issues explored therein. It is not the only book or article that provides an outline of what must be done, but it is certainly one of the most concise and evocatively written ones. Imagine a series of speeches designed to inspire and teach; to move us from frustration and apathy to the streets; that is what this book is all about.”

Bill Ayers is a social justice activist, teacher, Distinguished Professor of Education (retired) at the University of Illinois at Chicago, and author of two memoirs, Fugitive Days and Public Enemy. A graduate of the University of Michigan, the Bank Street College of Education, Bennington College, and Teachers College, Columbia University, Ayers has written extensively about social justice, democracy and education, the cultural contexts of schooling, and teaching as an essentially intellectual, ethical, and political enterprise. He is a past vice-president of the curriculum studies division of the American Educational Research Association.