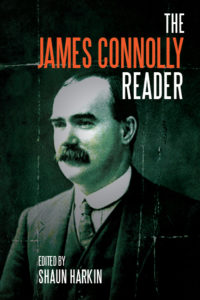 Considered by many Ireland’s most important revolutionary, James Connolly devoted his life to struggles against exploitation, oppression, and imperialism. Active in workers’ movements in the United States, Scotland, and Ireland, Connolly was a peerless organizer, sharp polemicist, and highly original thinker. His positions on the relationship between national liberation and socialism, revolution in colonized and underdeveloped economies, and women’s liberation in particular were often decades ahead of their time.

This collection seeks to return Connolly to his proper place in Irish and global history, and to inspire activists, students, and those interested in history today with his vision of an Ireland and world free from militarism, injustice, and deprivation.

“A book that should be on school shelves, as much as those of someone who wishes for a fairer society. Essential.”

“There are a lot of books about James Connolly, still, 150 years after his birth and just over a century since his death, one of the most significant and influential figures in the history of the labour movement on either side of the Atlantic. Unfortunately, many tend to be quite partial and serve more to try and make Connolly’s memory serve the political agenda of the author, rather than illuminate the actual thinking of the man. For a handy alternative to this sort of thing, Haymarket books have brought out this paperback that will make an extremely good starting point for anyone who wants to know more about his real thoughts and beliefs.”

“James Connolly was an uncompromising fighter for Irish freedom and a socialist for all the world. He lived in tumultuous times in dire poverty in Scotland, Ireland, and the United States. Everywhere, he encircled the working class. Connolly was a teacher of socialism and a militant union organizer. He wielded words like a scimitar, slicing through the thickets of lies to get to capitalism’s noxious heart. he wrote socialist songs which can still ring the rafters today. Connolly died in the struggle for national liberation in Dublin in 1916, having never given an inch to patriots who couldn’t stand socialism. With an erudite introduction, and a glittering selection of his penetrating, polemical, incisive, inspiring writings, Shaun Harkin has produced the Connolly book which socialists across the world have been waiting for.

Eamonn McCann, civil rights veteran, and author of War and an Irish Town

Shaun Harkin is an activist and writer presently based in Derry City, Ireland.