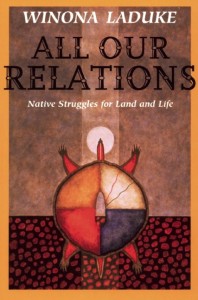 ALL OUR RELATIONS
Native Struggles for Land and Life

A thoughtful and in-depth account of Native resistance to environmental and cultural degradation, All Our Relations features chapters on the Seminoles, the Anishinaabeg, the Innu, the Northern Cheyenne, and the Mohawks, among others. Filled with inspiring testimonies of struggles for survival, each page of this volume speaks forcefully for self-determination and community.

“A brilliant, gripping narrative … I urge that everyone read [All Our Relations] … which describes the ravages of corporations and government activity on the reservations for our first natives. This is a beautifully written book…. As Winona LaDuke describes, in moving and often beautiful prose, [these] misdeeds are not distant history but are ongoing degradation of the cherished land of Native Americans.”

As Winona LaDuke’s All Our Relations shows, a vital Native American environmentalism is linking indigenous people throughout North America and Hawaii in the fight to protect and restore their health, culture, and the ecosystems on their lands. LaDuke herself is a member of the Anishinaabeg nation and was Ralph Nader’s Green Party running mate in 1996. These Native American activists take inspiration from their forebears’ responsible treatment of natural systems, based on reverence for the interconnectedness of all life forms.”

In this thoroughly researched and convincingly written analysis of Native American culture . . . LaDuke demonstrates the manner in which native people face a constant barrage of attacks that threaten their very existence.”

‘With a good ear and sharp eye, LaDuke introduces us to Native activists and records gross environmental abuse and creative resistance. By placing people in the center of industrial soup, LaDuke tells a story that has not been told before in this way.”

“A rare perspective on Native history and culture.”

“One of the pleasures of reading All Our Relations is discovering the unique voices of Native people, especially Native women, speaking in their own Native truths.”

“LaDuke unabashedly confronts spiritual and political grassroots missions with a tenacity that, as she explains, springs up from devotion to the land.”

“…as Winona LaDuke describes, in moving and often beautiful prose, [these] misdeeds are not distant history but are ongoing degradation of the cherished lands of Native Americans.”

“Hers is a beautiful and daring vision of political, spiritual, and ecological transformation. All Our Relations is essential reading for everyone who cares about the fate of the Earth and indigenous peoples.”

Winona LaDuke became involved with Native American environmental issues after meeting Jimmy Durham, a well-known Cherokee activist, while she was attending Harvard University. At the age of 18, she spoke in front of the United Nations regarding Native American rights and has since become one of the most prominent voices for American Indian economic and environmental concerns throughout the United States and internationally. She is an Anishinaabekwe (Ojibwe) enrolled member of the Mississippi Band Anishinaabeg, who lives and works on the White Earth Reservations. LaDuke is the Executive Director of the White Earth Land Recovery Project and Honor the Earth, where she works on a national level to advocate, raise public support, and create funding for frontline native environmental groups. In 1994, Winona was named by TIME magazine as one of America’s fifty most promising leaders under forty years of age. In both 1996 and 2000 she was Ralph Nader’s running mate in his Presidential campaigns, appearing on the Green Party ticket. A graduate of Harvard and Antioch Universities, Winona has written extensively on Native American and environmental issues. She is a former board member of Greenpeace USA and serves as co-chair of the Indigenous Women’s Network, a North American and Pacific indigenous women’s organization. She is the author of six books, including The Militarization of Indian Country (2011); Recovering the Sacred: the Power of Naming and Claiming (2005); the non-fiction book All our Relations: Native Struggles for Land and Life (1999, South End Press); and a novel—Last Standing Woman (1997, Voyager Press), LaDuke continues to spread her message and is arguably the most well-respected authority on Native American culture in the world.