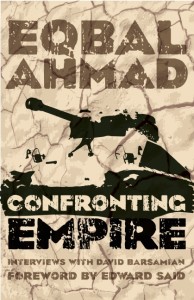 Edward W. Said once urged the legendary Eqbal Ahmad (1933–99) not to “leave your words scattered to the winds, or even recorded on tape, but collected and published in several volumes for everyone to read. Then those who don’t have the privilege of knowing you will know what a truly remarkable, gifted man you are.”

Unfortunately, Ahmad died before Said’s words came to fruition. But in this classic book, David Barsamian made Ahmad’s most provocative ideas available in book form. In these intimate and wide-ranging conversations, Ahmad discusses nationalism, ethnic conflict, the politics of memory, and liberation struggles around the world.

“Ahmad was that rare thing, an intellectual unintimidated by power or authority… Perhaps the shrewdest and most original anti-imperialist of Asia and Africa.”

“Fighting words, wise words, from one of the most powerful activist intellectuals of our time.”

“[Eqbal Ahmad] cared deeply and was willing to believe people could endure and be more brave and creative than they knew. He saw the big picture and still the value of individual stories. His incisive and lucid way of thinking and his voice are clear and sharp in these skillful interviews by David Barsamian.”

Pervez Hoodbhoy, from the Introduction

“For [those] who have missed Eqbal Ahmad in the year since he died, this book comes like rain during a drought.”

“These interviews provide a wonderfully focused, yet wide-ranging compendium of Eqbal Ahmad’s worldview.”

“Eqbal Ahmad, perhaps the shrewdest and most original anti-imperialist analyst of Asia and Africa…[was] a man of enormous charisma and incorruptible ideals…. He had an almost instinctive attraction to movements of the oppressed and the persecuted…[and] a formidable knowledge of history. Arabs, for example, learned more from him about the failures of Arab nationalism than from anyone else. … Ahmad was that rare thing, an intellectual unintimidated by power or authority.”

“[Eqbal Ahmad] was a shining example of what a true internationalist should be … Eqbal was at home in the history of all the world’s great civilizations. He had an encyclopedic knowledge of states past and present, and he knew that states had a rightful role to play. But he also knew that states existed to serve people not the other way around and he had little to do with governments, except as a thorn in their side. To friends, colleagues, and students, however, he gave unstintingly of himself and his time … His example and his memory will inspire many to carry on his work.”

“A very dedicated and honorable activist, Eqbal was right in the middle of everything.… He was a student of revolution and imperialism and a very good one.”

“Eqbal Ahmad was unique in combining compassion for the dispossessed-en masse and one by one; the intellectual capacity to analyze cultural, political, and economic issues on a transnational level; and an ability to raise his always eloquent voice on behalf of constructive and original solutions.”

“Eqbal was a teacher, a poet-analyst, a mentor to far more of us than he knew.”

“Eqbal Ahmad was a multitude of men—scholar, activist, political analyst, teacher, diplomat, visionary—but, above all, a foot-soldier in the army of peoples everywhere.”

Eqbal Ahmad (1933-1999) was Professor Emeritus of International Relations and Middle Eastern Studies at Hampshire College in Amherst, Massachusetts. He was managing editor of the quarterly Race and Class. His articles and essays appeared in the Nation and other journals throughout the world.

Edward W. Said (1935-2003) was University Professor of English and Comparative Literature at Columbia. A member of the American Academy of Arts and Sciences, the Royal Society of Literature and of Kings College Cambridge, his celebrated works include Orientalism, The End of the Peace Process, Power, Politics and Culture, and the memoir Out of Place. He is also the editor, with Christopher Hitchens, of Blaming the Victims, published by Verso. He died in September 2003.