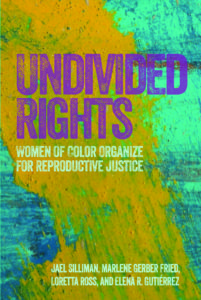 Undivided Rights captures the evolving and largely unknown activist history of women of color organizing for reproductive justice—on their own behalf.

Undivided Rights presents a textured understanding of the reproductive rights movement by placing the experiences, priorities, and activism of women of color in the foreground. Using historical research, original organizational case studies, and personal interviews, the authors illuminate how women of color have led the fight to control their own bodies and reproductive destinies. Undivided Rights shows how women of color—-starting within their own Latina, African American, Native American, and Asian American communities—have resisted coercion of their reproductive abilities. Projected against the backdrop of the mainstream pro-choice movement and radical right agendas, these dynamic case studies feature the groundbreaking work being done by health and reproductive rights organizations led by women of color.

The book details how and why these women have defined and implemented expansive reproductive health agendas that reject legalistic remedies and seek instead to address the wider needs of their communities. It stresses the urgency for innovative strategies that push beyond the traditional base and goals of the mainstream pro-choice movement—strategies that are broadly inclusive while being specific, strategies that speak to all women by speaking to each woman. While the authors raise tough questions about inclusion, identity politics, and the future of women’s organizing, they also offer a way out of the limiting focus on “choice.”

Undivided Rights articulates a holistic vision for reproductive freedom. It refuses to allow our human rights to be divvied up and parceled out into isolated boxes that people are then forced to pick and choose among.

Jael Silliman was a tenured associate professor of Women Studies at the University of Iowa from 1996 to 2002, where she worked on issues of race, reproductive rights and health, and gender and the environment in the United States and South Asia. She has published widely on these issues. Jael served as Program Officer for Reproductive Rights and Women’s Rights at the Ford Foundation in New York (2003–2009). She has been an activist in the transnational women’s movement for four decades and served on the boards of many women’s organizations. She is currently an independent scholar and writer documenting her community, the Bagdadi Jews of Calcutta, and has curated http://www.jewishcalcutta.in.

Marlene Gerber Fried (PhD, Brown) is known nationally and internationally as a writer, lecturer, and advocate for reproductive justice. She was founding president of the National Network of Abortion Funds,served on the board of the Women’s Global Network for Reproductive Rights, and was Interim President of Hampshire College in 2010–2011. She is currently Faculty Director of CLPP (Civil Liberties and Public Policy Program). She edited From Abortion to Reproductive Freedom:Transforming a Movement and is a co-author of Undivided Rights: Women of Color Organize for Reproductive Justice. She received the first Marlene Gerber Fried Abortion Access Vanguard Award (NNAF, 2015), the Felicia Stewart Advocacy Award (APHA, 2014), and a Warrior Woman Award from SisterSong (2014).

Loretta J. Ross was the National Coordinator of the Sister Song Women of Color Reproductive Justice Collective from 2005 to 2012. She has appeared on CNN, BET, Lead Story, Good Morning America, The Donahue Show, the National Geographic Channel, and Charlie Rose. She has been interviewed in the New York Times, Time, the Los Angeles Times, and the Washington Post, among others. She helped create the theory of reproductive justice in 1994 and led a rape crisis center in the 1970s. She co-authoredUndivided Rights: Women of Color Organize for Reproductive Justice in 2004.

Elena R. Gutiérrez is an associate professor of Gender and Women’s Studies and Latin American and Latino Studies at the University of Illinois–Chicago. She is author of Fertile Matters: The Politics of Mexican-Origin Women’s Reproduction and curator of the Reproductive Justice Virtual Library. She is committed to reproductive justice advocacy and documenting the activism of women of color.

“Undivided Rights is the most complete account of the vital contribution made by women of color to the contemporary reproductive rights movement. By giving these organizers the attention they deserve, the authors illuminate a distinctive vision for reproductive health and freedom that demands an end to social inequities. Essential reading for anyone committed to the struggle for reproductive justice.”

Dorothy Roberts, author of Killing the Black Body: Race, Reproduction, and the Meaning of Liberty

“For most women of color in the United States, our herstories are grounded in the sobering fact that our foremothers and our mothers didn’t have control over their reproductive freedom. And yet, many valiantly resisted. I am a generational beneficiary of that resistance.Undivided Rights is a necessary and compelling documentation of African-American/Black, Indigenous/Native American, Latin@, Asian and Pacific Islander women health activists’ radical organizing, which resulted in the reproductive justice movement. Moving beyond the important question of “choice,” this groundbreaking text demonstrates how reproductive justice is “theory, a lived practice, and a strategy,” which focuses on all aspects of women of color reproductive health and lives. It squarely places those women who are the most marginalized front and center of any dialogue or movement that is focused on all women’s health. Undivided Rights is as timely in 2016 if not more so now than it was when it was first published in 2004.”

“A thorough and impassioned history of the too-often hidden activism of women of color, Undivided Rights is a welcome and necessary addition to feminist literature.”

“Undivided Rights offers an impressive account of specific African American, Native American, Asian American, and Latina organizations that have fought to make a variety of reproductive health rights a reality for women of color. It demonstrates the overlaps and differences between issues of reproductive health as they arise in various communities of color and documents both historical and contemporary contours of community struggles for reproductive justice. An accessible and important resource for anyone who wishes to understand the ways in which women of color have both practically and theoretically expanded the terrain of feminist concerns about reproductive rights and justice.”

“Undivided Rights brings together stories of victory and challenge of women of color reproductive rights organizing. It documents the foundation of our current work and provides newer organizations and younger activists with lessons learned and with the inspiration to continue the struggle for reproductive justice. This book is a much needed and long awaited contribution to women’s history.”