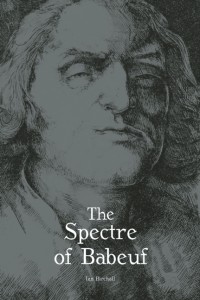 THE SPECTRE OF BABEUF

While the Great French Revolution of 1789 served as a political compass for several generations of European radicals, for socialists in particular, Gracchus Babeuf was far and away its most important leader. Babeuf and the newspaper he edited, Le Tribun du Peuple, pushed well beyond his contemporaries in their staunch defense of democracy and demands for the abolition of private property. Going so far as to call for an insurrection against the government of the Directory as it increased its repression against domestic agitators, Babeuf was eventually arrested and executed in what became known as the “conspiracy of equals.”

This study of Babeuf as a political thinker, based on an analysis of his extensive writings, and on scholarship unavailable in English, draws out why so many considered him to be a major precursor of the modern revolutionary socialist tradition and goes on to make the case that his ideas have much to teach today’s activists. The first part traces Babeuf’s political evolution in the context of the French Revolution, the second examines his changing reputation among subsequent historians, and the final section assesses the originality of his thought, showing him to be neither a Jacobin nor a Utopian.

This updated second edition features an important new introduction by Ian Birchall, a prolific writer and leading authority on Babeuf, that summarizes Babeuf’s historical significance, his ideas, and his practice in revolutionary France.

Ian Birchall is a socialist historian and translator based in London. His books include Sartre Against Stalinism, A Rebel’s Guide to Lenin, and Tony Cliff: A Marxist for His Time

The story of the French Revolution has been the subject of countless books and articles, but the story of Gracchus Babeuf has rarely been told in the English language, so this reprint of Ian Birchall’s 1997 book looking at the French revolutionary is enormously welcome…as Ian Birchall’s excellent book shows us, we still have much to learn from the revolutionary life of Gracchus Babeuf.

“Birchall succeeded magnificently in Spectre in restoring Babeuf as a major actor in the French Revolution and recovering his genuine place in the wider socialist tradition of self-emancipation. Babeuf comes alive as a revolutionary thinker who made a practical plan of action to realise communism.”