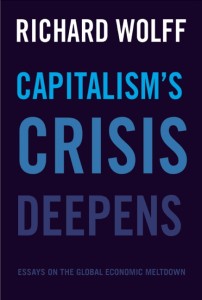 While most mainstream commentators view the crisis that provoked the Great Recession as having passed, these essays from Richard Wolff paint a far less rosy picture. Drawing attention to the extreme downturn in most of capitalism’s old centers, the unequal growth in the its new centers, and the resurgence of a global speculative bubble, Wolff – in his uniquely accessible style – makes the case that the crisis should be grasped not as a passing moment but as an evolving stage in capitalism’s history.

“Ideas of economic democracy are very much in the air, as they should be, with increasing urgency in the midst of today’s serious crises. Richard Wolff’s constructive and innovative ideas suggest new and promising foundations for much more authentic democracy and sustainable and equitable development, ideas that can be implemented directly and carried forward. A very valuable contribution in troubled times.”

“Richard Wolff is the leading socialist economist in the country. This book is required reading for anyone concerned about a fundamental transformation of the ailing capitalist economy!”

“Bold, thoughtful, transformative—a powerful and challenging vision of that takes us beyond both corporate capitalism and state socialism. Richard Wolff at his best!”

Richard D. Wolff is Professor of Economics Emeritus, University of Massachusetts, Amherst and a Visiting Professor at the New School University in New York. Wolff’s recent work has concentrated on analyzing the causes and alternative solutions to the global economic crisis. His groundbreaking book Democracy at Work: A Cure for Capitalism inspired the creation of Democracy at Work, a nonprofit organization dedicated to showing how and why to make democratic workplaces real.

Democracy at Work: A Cure for Capitalism