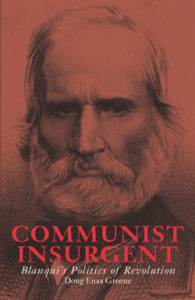 In this engaging intellectual and political biography, Doug Greene sympathetically but critically tells the story of one of the great French revolutionaries, Louis-Auguste Blanqui.

Blanqui (1805-1881) dedicated himself to the cause of working-class revolution, and his courage and conviction inspired generations of radicals. He believed that communism was the only way to fulfill the promises of the Enlightenment and the French Revolution, and that only communism could liberate workers and ultimately achieve liberté, égalité, and fraternité. For Blanqui, an egalitarian future could only be achieved by overthrowing the old one by force of arms. To realize that goal, Blanqui organized nearly a half-dozen failed consipracies, and spent half of his life in prison. Despite everything he endured, Blanqui refused to compromised. He stayed true to his revolutionary vision until the end of his life.

Historically, Blanqui is either remembered with derision or, at best, as a noble failure. But during his lifetime, Blanqui’s dedication and courage made him a towering figure in the eyes of both friend and foe. To the ruling classes, he embodied their nightmares of communist revolution. To the working class, he was their champion and hope. This measured consideration of his life and legacy—including his political shortcomings—is essential reading for anyone hoping to understand the history of the revolutionary movement.

“Those interested in the history of the socialist movement should welcome this new book by Doug Enaa Greene. Brief and accessibly written, it presents the main elements of Blanqui’s life in a perspective which is sympathetic to his revolutionary goals while being rigorously critical in its approach.”

Doug Enaa Greene is an independent historian and writer living in the greater Boston area. His writing has appeared in many publications, such as Socialism and Democracy, International Socialist Review, LINKS International Journal of Socialist Renewal, Jacobin, Cultural Logic, and Red Wedge Magazine.