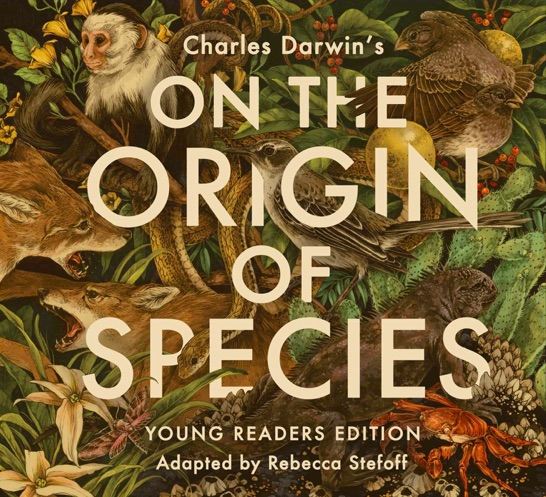 ON THE ORIGIN OF THE SPECIES
Young Readers’ Edition

Rebecca Stefoff, adapted from the work of Charles Darwin

Charles Darwin’s groundbreaking On the Origin of Species is now available in an accessible, illustrated edition for young readers that includes an introduction, glossary, modern insight and information, and more!

Charles Darwin’s famous theory of natural selection shook the world of science to its core, challenging centuries of orthodox beliefs about life itself. Darwin’s boundary-shattering treatise was captured in On the Origin of Species, originally published in 1859, a groundbreaking and detailed study on ecological interrelatedness, the complexity of animal and plant life, and the realities of evolution.

This Young Reader’s Edition makes Darwin’s cornerstone of modern science accessible to readers of all ages. Meticulously curated to honor Darwin’s original text, this compelling edition also provides contemporary insight, photographs, illustrations, and more. This adaptation is a must-have for any reader with a curious mind and the desire to explore one of the most influential books of our time.

“This attractive, oversize adaptation of Charles Darwin’s classic work of science has been shortened, updated, and streamlined for clarity and readability. Stefoff’s introduction provides biographical detail about Darwin and how the naturalist’s excursions on the HMS Beagle were instrumental to his theory’s development. She also describes the fundamental concepts behind Darwin’s “Big Idea” as well as its significant controversy. Vocabulary words appear in bold throughout the text, while sidebars and supplemental sections delve into related topics: myths and misinterpretations of evolution; how modern research has deepened scientific understanding of evolutionary processes; and the concept of “artificial selection” as it applies to modern dogs. Bright photographs and illustrations of plants, animals, and habitats provide an expansive and inviting visual element. With valuable modifications and enhancements, Stefoff preserves the richness of Darwin’s content for contemporary young readers.”