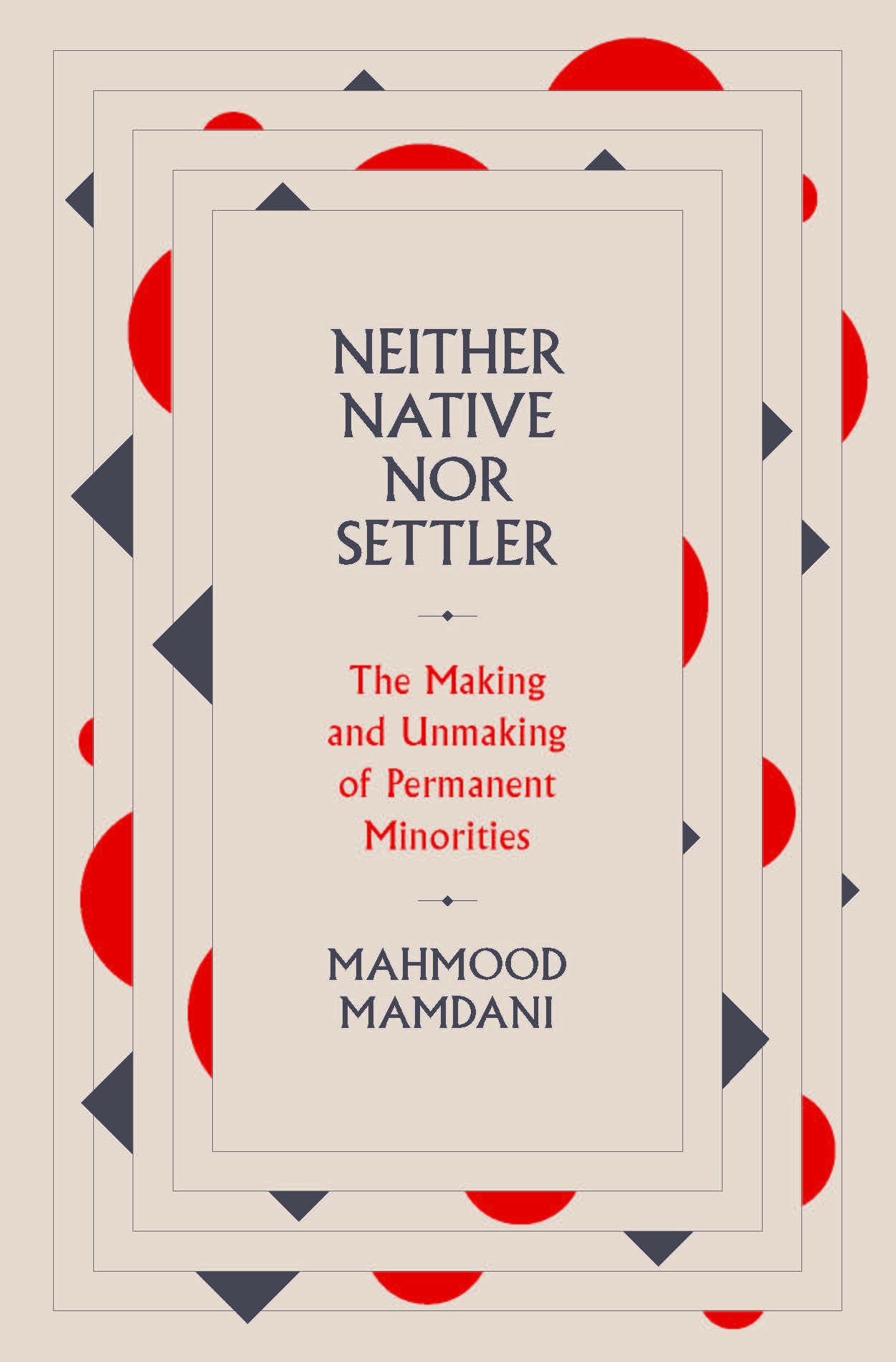 NEITHER SETTLER NOR NATIVE
The Making and Unmaking of Permanent Minorities

Making the radical argument that the nation-state was born of colonialism, this book calls us to rethink political violence and reimagine political community beyond majorities and minorities.

In this genealogy of political modernity, Mahmood Mamdani argues that the nation-state and the colonial state created each other. In case after case around the globe—from the New World to South Africa, Israel to Germany to Sudan—the colonial state and the nation-state have been mutually constructed through the politicization of a religious or ethnic majority at the expense of an equally manufactured minority.

The model emerged in North America, where genocide and internment on reservations created both a permanent native underclass and the physical and ideological spaces in which new immigrant identities crystallized as a settler nation. In Europe, this template would be used by the Nazis to address the Jewish Question, and after the fall of the Third Reich, by the Allies to redraw the boundaries of Eastern Europe’s nation-states, cleansing them of their minorities. After Nuremberg the template was used to preserve the idea of the Jews as a separate nation. By establishing Israel through the minoritization of Palestinian Arabs, Zionist settlers followed the North American example. The result has been another cycle of violence.

Neither Settler nor Native offers a vision for arresting this historical process. Mamdani rejects the “criminal” solution attempted at Nuremberg, which held individual perpetrators responsible without questioning Nazism as a political project and thus the violence of the nation-state itself. Instead, political violence demands political solutions: not criminal justice for perpetrators but a rethinking of the political community for all survivors—victims, perpetrators, bystanders, beneficiaries—based on common residence and the commitment to build a common future without the permanent political identities of settler and native. Mamdani points to the anti-apartheid struggle in South Africa as an unfinished project, seeking a state without a nation.

“Linking the histories of the United States, Nazi Germany, and apartheid South Africa, Mahmood Mamdani’s forthcoming book, Neither Settler Nor Native: The Making and Unmaking of Permanent Minorities … demonstrates how a broad rethinking of political issues becomes possible when Western ideals and practices are examined from the vantage point of Asia and Africa.”

“Mahmood Mamdani’s new book, Neither Settler Nor Native: The Making and Unmaking of Permanent Minorities, is a densely packed study of the modern nation state that proposes a shift away from what one might call narrow identity politics…An important book demands many readings. An initial review – a reading and rereading – can barely scratch. I hope readers will do what I intend: to read it again. An important book raises questions. This book raises many, and not least whether we can really be free of the majority-minority and settler-native dichotomies that vex many states. Mamdani proposes that they can be overcome.”

“Mahmood Mamdani’s latest book, Neither Settler nor Native: The Making and Unmaking of Permanent Minorities makes an urgent intervention in contemporary politics. In a searing critique of the nation-state, Mamdani persuasively argues that there will be no decolonisation, no democracy, no peace until we de-link the association between the “nation” and state power.”

“This book compels the reader to rethink the origin and development of the nation-state and its replication as inseparable from European colonialism, beginning with the establishment of the Spanish state through racialized ethnic cleansing and the 1492 deportations of Jews and Moors. In elegant prose with no wasted words or jargon, this original and brilliant work persuasively argues that the United States created the template for settler-colonialism, providing the model upon which the South African apartheid regime and the Israeli state were patterned, and also used by the Nazi regime that adopted US race theory and catastrophic ethnic cleansing. The book provides not only profound historical analysis but also deeply researched thick descriptions of the current US and Israeli regimes of settler-colonialism and more.

Roxanne Dunbar-Ortiz, author of An Indigenous Peoples’ History of the United States

“Brilliant! Mahmood Mamdani’s Neither Settler nor Native is nothing less than a deeply learned account of the origins of our modern world. Situating the beginnings of the nation-state in the settler-colonial practice of creating permanent minorities, Mamdani illustrates how this damaging political logic continues into our own era, resulting far too often in today’s extraordinary political violence. Through his own elegant contrarianism, Mamdani rejects the current focus on human rights as the means to bring justice and accountability to the victims of this colonial and postcolonial bloodshed. Instead, he calls for a new kind of political imagination, one that will pave the way for a truly decolonized future. Joining the ranks of Hannah Arendt’s Imperialism, Frantz Fanon’s The Wretched of the Earth, and Edward Said’s Orientalism, Neither Settler nor Native is destined to become a classic text of postcolonial studies and political theory.”

“A powerfully original argument, one that supplements political analysis with a map for our political future.”

“Neither Settler Nor Native analyzes seemingly disparate political histories to illuminate the intertwined logic of colonial statecraft and nation-building, the legacy of which was the violent manufacture of permanent majorities and minorities the world over.   This is a masterwork of historical comparison and razor-sharp political analysis, with grave lessons about the pitfalls of forgetting, moralizing, or criminalizing this violence. Mamdani also offers a hopeful rejoinder in a revived politics of decolonization, not as romantic revolution but a renewed art of politics.  Decolonization uses the tools of political engagement and negotiation to unsettle inherited identities, to convert perpetrators and victims into survivors, natives and settlers into citizens, nation-states into inclusive democracies.”

Mahmood Mamdani is Herbert Lehman Professor of Government and Professor of Anthropology and of Middle Eastern, South Asian, and African Studies (MESAAS) at Columbia University and Director of the Makerere Institute of Social Research in Kampala. He is the author of Citizen and Subject, When Victims Become Killers, and Good Muslim, Bad Muslim.