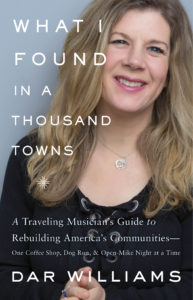 WHAT I FOUND IN A THOUSAND TOWNS
A Wandering Minstrel’s Guide to Building Better Towns: One Coffee Shop, Dog Run, & Open-Mike Night at a Time

Read an excerpt in TIME: Dar Williams: How to Make Your Town Somewhere Everyone Wants to Live

A beloved folk singer presents an impassioned account of the fall and rise of the small American towns she cherishes.

Dubbed by the New Yorker as “one of America’s very best singer-songwriters,” Dar Williams has made her career not in stadiums, but touring America’s small towns. She has played their venues, composed in their coffee shops, and drunk in their bars. She has seen these communities struggle, but also seen them thrive in the face of postindustrial identity crises.

Here, Williams muses on why some towns flourish while others fail, examining elements from the significance of history and nature to the uniting power of public spaces and food. Drawing on her own travels and the work of urban theorists, Williams offers real solutions to rebuild declining communities.

What I Found in a Thousand Towns is more than a love letter to America’s small towns, it’s a deeply personal and hopeful message about the potential of America’s lively and resilient communities.

“Dar Williams, a singer-songwriter in the folk-introspective vein, has taken a road less traveled. She has written a book about grass-roots urban renewal…[What I Found in A Thousand Towns] does remind us that walking on the wild side—which these days means taking a stroll outside one’s techno-bubble—is a trip worth taking”

“The popular folk singer and songwriter Dar William’s new book is not another endless parade of music memoirs. Having performed around around the United States for so many years, Williams writes about how she believes towns can best thrive in an age of economic and environmental struggles…. [What I Found in a Thousand Towns] reads as if Pete Seeger and Jane Jacobs teamed up, more a report from the Green party than the green room.”

“During a time of political, economic, and social upheaval across the United States, Williams’ grounded optimism is a refreshing corrective.”

“What I Found in a Thousand Towns is a thoughtful and passionately explored journey of how American towns can revitalize and come to life through their art, food, history, mom and pop business, and community bridge building. Dar Williams gives us hope and vision for the possibilities of human connection.”

“To become a great city planner takes three things: strong powers of observation, the ability to communicate, and the opportunity to travel the world to learn from successes and failures. Anyone who has heard a Dar Williams song is familiar with her gifts in the first two categories. And what better vocation than wandering minstrel to get to know the wide world and all its places? So observant, so articulate, and so prepared, Ms. Williams has created a stealth city planning text that is unsurpassed in its ability to charm and enlighten.”

Jeff Speck, city planner and author of Walkable City: How Downtown Can Save America, One Step at a Time

“Dar Williams channels the soul and spirit of Jane Jacobs. With a song-writer’s eye for detail and an urbanist’s nose for what makes cities and towns work, she provides stunning portraits of America’s great small towns. What I Found in a Thousand Towns will open your eyes to the key things that makes communities succeed and thrive even when the deck is stacked against them. I love this book: You will too.”

Dar Williams is a folk singer-songwriter based in the Hudson Valley. She has recorded nine studio albums and released two live albums, and has been touring non-stop across the US for over twenty years. Williams is also a well-known environmental, feminist, and social justice activist; she works with children on planting bee-friendly gardens, wrote a series of green living columns for the Huffington Post, champions progressive gender and sexual politics, and performs at many benefit concerts including one to support the prisoner rights group Bread and Roses. In 2012, she taught “Music Movements in a Capitalist Democracy” at Wesleyan University. In 2013, she started leading a songwriting retreat called “Writing a Song That Matters” at the Garrison Institute in Garrison, New York. Williams is the author of two young adult novels, Amalee and Lights, Camera, Amalee.