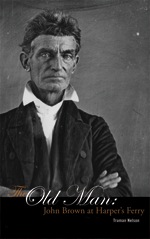 The classic historical biography reissued for the 150th anniversary of Brown’s celebrated uprising against slavery.

On October 16, 1859, John Brown led a historic attack on the Harper’s Ferry Armory. Nelson narrates the incredible events that unfolded that day and explodes the conventional dismissal of John Brown as a fanatic, presenting him as a revolutionary who, at the cost of his own life, helped bring an end to slavery.

After his execution, the great abolitionist Frederick Douglass said of Brown, “If John Brown did not end the war that ended slavery, he did at least begin the war that ended slavery. … Until this blow was struck, the prospect for freedom was dim, shadowy and uncertain. The irrepressible conflict was one of words, votes and compromises. When John Brown stretched forth his arm, the sky was cleared. The time for compromises was gone — the armed hosts of freedom stood face to face over the chasm of a broken Union — and the clash of arms was at hand. The South staked all upon getting possession of the Federal Government, and failing to do that, drew the sword of rebellion and thus made her own, and not Brown’s, the lost cause of the century.”

“Truman Nelson’s biography of John Brown is a refreshing and eloquent corrective to the common misconceptions about the character and actions of this extraordinary American hero.”

Truman Nelson (1911-1987) was the author of numerous books, including The Surveyor and The Right of Revolution.