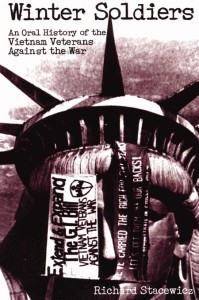 The story of the soldiers who spoke their conscience and helped end the war in Vietnam.

The Vietnam War left an indelible mark on those who took part in it and spawned an antiwar movement more popular than any other in U.S. history. In all that has been written about the war, rarely do the worlds of the Vietnam veteran and the antiwar demonstrator come together. Yet in a small but articulate organization known as Vietnam Veterans Against the War (VVAW), the two made common cause.

Winter Soldiers recovers this moving chapter in the history of the Vietnam War era. Bringing together the voices of more than thirty former and current members of the VVAW, oral historian Richard Stacewicz offers an eloquent account of the impact of the war on the lives of individuals and the nation.

“Winter Soldiers is an immensely valuable contribution to the history of the Vietnam War. It brings to life, through the words of the veterans themselves, the journey each individual made, through the crucible of combat, from warrior to protester.”

“Stacewicz has captured the simple, rough-hewn elegance of the voices of Vietnam veterans. As in other wars, the ordinary soldier always has the most extraordinary words for history.”

Stanley Kutler, editor of The Encyclopedia of the Vietnam War

“By turns irreverent and painfully sincere, Winter Soldiers will transform stereotyped views of both veterans and the antiwar movement.”

Richard Stacewicz is coordinator of the Honors Program and a professor of social science and history at Oakton Community College in Des Plaines, Illinois. He joined Vietnam Veterans Against the War in 1993 and works today with the Chicago chapter.