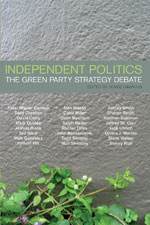 Leading indpendent and Green Party activists ask: Can we break the two-party stranglehold on U.S. politics?

Ralph Nader, Peter Camejo, and other Green Party members and allies assess the 2000 and 2004 presidential elections, and debate strategy for how to build a challenge to the Republicans and an increasingly corporate Democratic Party.

“We all should be appalled at our profoundly undemocratic electoral system. This volume makes a valuable contribution to our thinking about that controversial and difficult subject — the role of an opposition third party.”

“The future of the Green Party clearly depends on confronting honestly the bitter lessons of 2004. This is an invaluable sourcebook: rich in ideas and unsparing in its critique of liberal ‘lesser-evilism’.”

Howie Hawkins is a Teamster and Green activist in Syracuse, New York.