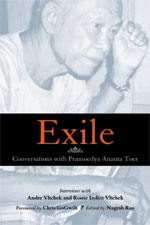 Indonesia’s most celebrated writer speaks out against tyranny and injustice in a young and troubled nation.

Pramoedya Ananta Toer helps us understand a land whose history has been corrupted and distorted both by Western intervention and internal strife. Toer here discusses personal and political topics he could never before address in public, in a book completed just before his death in early 2006.

“What Pram says is moving, and at times painfully so. Following everything he has experienced, from his beginnings as a writer under Dutch imprisonment in the late 1940s through the period of his exile on Buru Island under the ‘New Order’ regime, it is striking to learn that Indonesia’s greatest living writer still describes his present condition as one of ‘internal exile’.”

André Vltchek is an American filmmaker and journalist. He worked as a war correspondent in Peru, Colombia, Indonesia, Sri Lanka, Turkey, Mexico, East Timor and Bosnia. His most recent book is Western Terror : From Potosi to Baghdad (Common Courage Press). Vltchek is also a regular contributor to ZNet.

Rossie Indira is the production manager and translator of the documentary Terlena: Breaking of a Nation. Her father was imprisoned with Toer and was one of his closest confidants.

Nagesh Rao is Assistant Professor of English at The College of New Jersey, where he teaches Postcolonial Studies. His research on postcolonial literature and theory has appeared in several journals, including Race and Class, South Asian Review and Postcolonial Text.