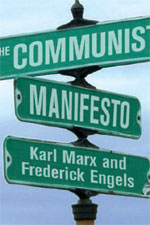 By Karl Marx and Frederick Engels

Here, at last, is an authoritative introduction to history’s most important political document, with the full text of The Communist Manifesto by Marx and Engels.

This beautifully organized and presented edition of The Communist Manifesto is fully annotated by Phil Gasper, with clear historical references and explication, additional related texts, and a glossary that will bring the text to life for students, as well as the general reader.

Since it was first written in 1848, the Manifesto has been translated into more languages than any other text other modern text. It has been banned, censored, burned, and declared “dead.” But year after year, the text only grows more influential, remaining required reading in courses on philosophy, politics, economics, and history.

“Apart from Charles Darwin’s Origin of Species,” notes the Los Angeles Times, the Manifesto “is arguably the most important work of nonfiction written in the 19th century.” The Washington Post calls Marx “an astute critic of capitalism.” Writing in the New York Times, Columbia University professor Steven Marcus describes the Manifesto as a “masterpiece” with “enduring insights into social existence.”

The New Yorker recently described Karl Marx as “The Next Thinker” for our era. This book will show readers why.

“What is globalization? Here is one of the best answers. It is the ‘constant revolutionizing of production’ and the ‘endless disturbance of all social conditions.’ It is ‘everlasting uncertainty.’ Everything ‘fixed and frozen’ is ‘swept away,’ and ‘all that is solid melts into air.’ Yes, you have read this before. It is from the Communist Manifesto, by Messrs. Marx and Engels.”

“Distinguished from all other English-language editions currently in print in two critical ways: (1) it is a fully annotated edition, and (2) it provides much needed corrections to the 1888 Samuel Moore translation supervised by Engels. Gasper has also Americanized the spelling and modernized the punctuation and capitalization. In addition to the text of the Manifesto itself and the annotations, the book includes a clear, accessible introduction by Gasper entitled ‘History’s Most Important Political Document’ and a useful afterword, also by him, entitled ‘Is the Manifesto Still Relevant?’ In the latter he replies to criticisms of the Manifesto (some emanating from the left) and demonstrates its continuing relevance. The numerous appendices to the book include all the prefaces to the Manifesto, Engels’s ‘Principles of Communism’, and a generous collection of extracts from Marx and Engels’ writings.”

“‘The forcible overthrow of all existing social conditions.’ This seemed an outstandingly good idea when I first read the Manifesto at age 16; today, approaching age 60, it resounds with even greater urgency.

“In a world ruled by Capital, the youthful Marx and Engels remain our contemporaries, and the breathtaking sweep of their vision of modern history, as well as their invincible optimism in the ultimate victory of Labor, are still our lodestones.

“True, they did not foresee (how could they?) the defeat of the three Internationals and the ensuing savagery of the 20th century. Nor could they anticipate that there might be no world left to win as neoliberal capitalism rapidly undermines the ecological conditions for sustainable human civilization, while reproducing a global slum proletariat on a scale that dwarfs Victorian imagination.

“But their essential program of revolt endures like granite: Communists join the ranks of every struggle, not as bearers of “sectarian principles of their own,” but as champions of the interests of the working class as a whole, ‘independently of all nationality.’ Moreover, ‘in all these movements they bring to the front, as the leading question in each, the property question, no matter what its degree of development at the time.’

“To this, we must add: Now, comrades, act now, while there is still time left to put the earth on new foundations.”

Mike Davis, author, City of Quartz: Excavating the Future in Los Angeles and The Monster at Our Door: The Global Threat of Avian Flu

“What stands out about the Communist Manifesto is its incredible foresight. Marx and Engels were writing more than 150 years ago, when capitalism was still in its infancy. Yet they were able to telescope not only what would bring about capitalism’s development, but also the class forces that could bring about its downfall.

“Marx and Engels understood that the capitalist system requires massive inequality between the rich and poor. They wrote, ‘You are horrified at our intending to do away with private property. But … private property is already done away with for nine-tenths of the population: its existence for the few is solely due to its non-existence in the hands of those nine-tenths.’

“The Manifesto described exploitation as rooted in alienation from the labor process decades before the rise of the assembly line: ‘The price of … labor is equal to its cost of production. In proportion, therefore, as the repulsiveness of the work increases, the wage decreases.’ Women’s oppression also figured in Marx and Engels’ analysis from the outset. In the Manifesto, they argued, “The bourgeois … has not even a suspicion that the real point of communists is to do away with the status of women as mere instruments of production.’

“The essence of the Communist Manifesto has not only withstood the test of time, but has also never been more relevant. Marx and Engels were clear that socialism would not come about because ruling-class people suddenly develop a guilty conscience, but is only possible through collective, democratic struggle by the vast majority.

“Marxism points the way forward today, at a time when the need for change cries out everywhere you look. In the era of capitalist globalization and imperialist war, the need for international working-class solidarity is captured in the Manifesto’s most famous phrase, ‘Workers of the world unite! You have nothing to lose but your chains!’”

“There are many parts of the Manifesto that are very applicable today.

“Bourgeois theorists, particularly at the height of the welfare state, talked about the class struggle being outmoded, with capitalism having reached a certain level of development that eliminated the class struggle, ideological politics and the need for class organization. They cited tripartite organizations between business, the government and the trade unions. They talked about advanced capitalism and the technological revolution. There was a certain euphoria that permeated good sections of social democracy.

“We’ve seen that this was a passing period, and that subsequently, beginning by at least the late 1970s or early 1980s, there was a counter-offensive by capital. This demonstrates once again the profound understanding that Marx and Engels had of the centrality of the class struggle–how history moves not through technological changes, but rather how those changes are mediated through the class struggle and class organization.

“Another point that I think is extremely important today is that Marx saw the way in which capitalism would become internationalized. Subsequently, there was Lenin’s analysis of how this internationalization of capital took the form of imperialism. But I think it was Marx who originally saw the way in which the class constraints on continual capital reproduction literally forced capital to go overseas in order to sustain its rate of profit.

“These are important elements that are central to understanding the world today, and I think they’re particularly relevant when we see many critics of capitalism searching for alternatives, and concocting what they call utopias, dreams or whatever out of whole cloth. They don’t look at the objective conditions for creating alternatives.

“Marx’s brilliant insight was looking at the social organization of production. More than ever — on a world scale, on a national scale, or any other scale — the social division of labor today is so far developed and so profoundly embedded in practically all the societies of the world that you can see everywhere the contradiction that Marx and Engels pointed out between the social production of labor and private ownership.

“The structure is an irrational one since the social division of labor implies a great deal of cooperation among the producers, but under the dominance of essentially irrelevant forms of ownership. Therefore, the possibilities exist far more today to move from social production to social ownership, and from social ownership to social management.

“At the same time that we see this great advance in social production, we also have to recognize that there has been, at least in our period, a certain decline in the recognition by the direct producers of the circumstances in which they find themselves.

“So here is where Marx and Engels lay out the need for a class-based political party to bridge the gap between objective conditions and the subjective consciousness needed to transform this contradiction into a new form of life.“

Gasper is co-editor of The Philosophy of Science (MIT Press, 1991), and a contributor to Explanation and Its Limits (Cambridge, 1990), The Cambridge Dictionary of Philosophy (2nd ed., 1999), The Struggle for Palestine (Haymarket, 2002), Enduring Freedom or Enduring War? (Maisonneuve, 2005), Encyclopedia of Activism and Social Justice (Sage, 2007), Encyclopedia of the Israeli-Palestinian Conflict (Lynne Rienner, forthcoming) and Encyclopedia of Race and Crime (Sage, forthcoming). His academic publications have also appeared in The Philosophical Review, Philosophy of Science, The Radical Philosophy Review of Books and Hypatia.

He is a on the editorial board of — and writes the bimonthly “Critical Thinking” column for — the International Socialist Review, and is a contributor to Socialist Worker, CounterPunch, ZNet, and MRzine.