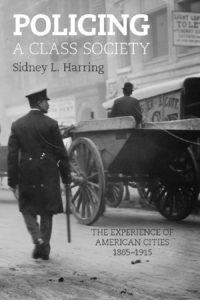 POLICING A CLASS SOCIETY
The Experience of American Cities, 1865–1915

READ: Why a History of the Police’s Relationship to the Working Class is Being Re-Released Now

Police are popularly understood as the “thin blue line”  that “serves and protects” us from violence and crime in the pursuit of justice. In Policing a Class Society, Sidney L. Harring provides an essential corrective to the assumption that police have always been around, that they are a force for deterring crime, and that they have an interest in the pursuit of justice. Looking at the growth of the urban police forces in northern cities around the turn of the twentieth century, Harring argues that the police protected the interests of manufacturers. Operating almost as hired guns, police disciplined the working class in order to maintain the existing order of capitalist relations.

“Policing a Class Society is a significant contribution to the literature on criminal justice history.”

“Sidney L. Harring’s Policing a Class Society from 1983 should be considered a classic.”

Sidney L. Harring, Professor Emeritus at CUNY School of Law, is the author of more than 80 articles, chapters, and book reviews on such subjects as American and British colonial history, Native American law, indigenous rights, and criminal law. H has written four books, the third of which, White Man’s Law: Native People in Nineteenth Century Canadian Jurisprudence, was a finalist for the Donner Prize as the best book on Canadian public policy published in 1998. During the course of his career, he has received three Fellowships in Legal History from the National Endowment for the Humanities, a Fulbright Fellowship, and was a Rockefeller Fellow at the McNickle Center for the History of the American Indian.