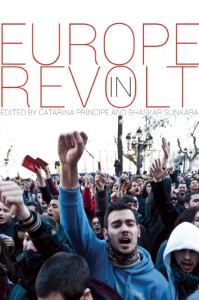 In response, something happened that few outsiders expected: A massive wave of resistance erupted across Europe. With mainstream parties largely discredited by their support of austerity measures, room opened for radicals to offer a left-wing alternative.

Europe in Revolt examines the key parties and figures behind this insurgency, with insider coverage of the roots of the social crisis–and the radicals seeking to reverse it–in Cyprus, England, France, Germany, Greece, Iceland, Ireland, Italy, the Netherlands, Portugal, Spain, and Sweden.

1. Syriza: The Dream That Became a Nightmare
Panagiotis Sotiris

2. Greece: Turning “No” into a Political Front
Stathis Kouvelakis

4. The Left and the “Swedish Model”
Petter Nilsson & David Zachariah

7. What Happened to the French Left?
Clément Petitjean

9. Germany: In the Eye of the Storm
Mark Bergfeld

13. From the Indignados to Podemos?
Luke Stobart

“There could hardly be a better guide to Europe, its crises, and its radicals. After so many promising starts that went awry, from Rifondazione Comunista to Syriza, there is an urgent need to take stock of the situation. This volume of brilliant, incisive texts—curated and edited by two of the best minds on the radical left—contains the answers we need.”

“Is permanent austerity going to be the new normal for Europe? For more than two decades, it certainly seemed so. But now, in the streets and factories, at the ballot box and in mass rallies, the European working class is starting to come together around a strategy of resistance. Sunkara and Príncipe have marshaled a superb collection charting the contours of the fightback, in both the center and the periphery of European neoliberalism. Nobody interested in the struggle for a more humane Europe can ignore it.”

Vivek Chibber, author of Postcolonial Theory and the Specter of Capital

Susan Weissman, author of Victor Serge: The Course Is Set on Hope

Catarina Príncipe is a social movement activist from Portugal. She is a member of Bloco de Esquerda (Portugal) and Die Linke (Germany) and a contributing editor at Jacobin magazine, where she writes frequent dispatches on the European situation.

Bhaskar Sunkara is the founding editor and publisher of Jacobin magazine. He is a regular contributor to The Nation and In These Times magazine.