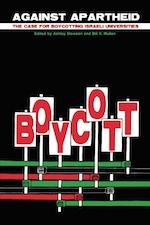 AGAINST APARTHEID
The Case for Boycotting Israeli Universities

Focusing on the complicity of Israeli universities in maintaining the occupation of Palestine, and on the repression of academic and political freedom for Palestinians, Against Apartheid powerfully explains why scholars and students throughout the world should refuse to do business with Israeli institutions. This rich collection of essays is a handbook for scholars and activists.

“A stunning collection by leading scholar-activists–offering rigorous, challenging, clearly argued and fiercely urgent examinations of the role of the academic boycott in the Palestinian struggle for freedom. It is crucial reading for anyone interested in the intellectual and moral underpinnings of the BDS movement in the academy.”

“This book is a tour de force: a must read that belongs on the nightstand of every decent human being on this earth concerned with peace and justice. Superbly edited, it brings together the most powerful and cogent cases ever made for BDS: the now widely global, non-violent civil disobedience that Palestinians and their supporters have launched against the vicious monstrosity of Zionist theft of their homeland. BDS is the civilized people’s response to the barbarity of Israeli colonial occupation of Palestine and Against Apartheid provides a relentlessly persuasive body of brilliant scholarship to prove the point. Do not miss it!”

Hamid Dabashi, Hagop Kevorkian Professor of Iranian Studies and Comparative Literature at Columbia University in the City of New York

“Voices resound through this book with the reasoned argument that Israeli apartheid must be ended – and the way for intellectuals and artists to participate in this struggle is to boycott Israeli institutions that participate in and benefit from the occupation of Palestinian lands. This is an intellectual guidebook for the Boycott-Divestment-Sanctions (BDS) movement.”

“A specter is haunting Israel–the specter of a new anti-apartheid movement, working to end occupation, home demolitions, illegal settlements, detentions, relentless state violence, and the complicity of its most respected institutions in the brutal subjugation of the Palestinian people. Against Apartheid is its text, its manifesto. It is at once a powerful indictment of Israeli apartheid and the university’s role in designing, maintaining, and protecting the system, and an inspiring history of how Palestinian activists, artists, and intellectuals turned a global appeal into a global movement.”

“The explosive growth of the BDS movement on US campuses has been one of the sparks that is firing the critical exit of business from Israel’s illegal West Bank settlements, and it owes much of its weight to many of the writers of this book. There is already a sea change in attitudes around the world to Israel’s decades long record of impunity for the violent dispossession of Palestinians, the assassinations of their leaders, the deaths of their children, the theft of their land and water, the denial of dignity and hope in their shameful refugee camps across the region. Key to this book’s intervention is its demonstration of the silent complicity between Israeli universities and the military establishment. This alone is enough to force a rethink for those who still think boycotting Israeli universities is an issue of freedom of speech.”

Victoria Brittain, author, Shadow Lives: The Forgotten Women of the War on Terror

Ashley Dawson is Professor of English at the City University of New York’s Graduate Center and at the College of Staten Island/CUNY. He is the author of Capitalism and Extinction (PM Press, 2015), The Routledge Concise History of Twentieth-Century British Literature (2013) and Mongrel Nation: Diasporic Culture and the Making of Postcolonial Britain (Michigan, 2007), and co-editor of three essay collections: Democracy, the State, and the Struggle for Global Justice (Routledge, 2009); Dangerous Professors: Academic Freedom and the National Security Campus (Michigan, 2009); and Exceptional State: Contemporary U.S. Culture and the New Imperialism (Duke, 2007). He is former editor of Social Text Online and of the AAUP’s Journal of Academic Freedom.

Bill V. Mullen is Professor of American Studies and English at Purdue University. He is a member of the Advisory Board for USACBI (United States Campaign for the Academic and Cultural Boycott of Israel) and faculty advisor for Purdue Students for Justice in Palestine. In 2012 he was a member of a USACBI delegation to Palestine. He is the author of Un-American: W.E.B. Du Bois and the Century of World Revolution, Afro-Orientalism, and Popular Fronts: Chicago and African American Cultural Politics, 1935-1946. His writing on Palestine and academic boycott has appeared in Electronic Intifada, Mondoweiss, Social Text and International Socialist Review. He lives in West Lafayette, Indiana.

Ali Abunimah is the author of One Country: A Bold Proposal to End the Israeli Palestinian Impasse, The Battle for Justice in Palestine, and cofounder and director of the widely acclaimed publication The Electronic Intifada. Based in the United States, he has written hundreds of articles and been an active part of the movement for justice in Palestine for 20 years. He is the recipient of a 2013 Lannan Cultural Freedom Fellowship.