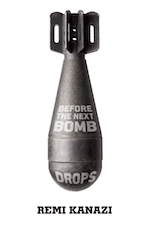 BEFORE THE NEXT BOMB DROPS
Rising Up from Brooklyn to Palestine

Remi Kanazi’s poetry presents an unflinching look at the lives of Palestinians under occupation and as refugees scattered across the globe. He captures the Palestinian people’s stubborn refusal to be erased, gives voice to the ongoing struggle for liberation, and explores the meaning of international solidarity.

In this latest collection, Kanazi expands his focus outside the sphere of Palestine and presents pieces examining racism in America, police brutality, US militarism at home and wars abroad, conflict voyeurism, Islamophobia, and a range of other issues.

“Remi Kanazi is one of the most courageous voices of this generation.”

“This book of poetry was devastating to pick up and impossible to put down.”

“His rhymes and rhythms, filled with sharp wit, irony and deep empathy…tackle some of the most urgent political struggles of our day.”

Ali Abunimah, co-founder of Electronic Intifada and author of the Battle for Justice in Palestine

“Each verse made me sink deeper into my chair and helped unleash a cascade of relieving tears: in anger, in mourning, and in hope.”

“A poetic…personal journey into the past and present of Palestine that will resonate with anyone concerned with the land and its people.”

Ilan Pappé, bestselling author of the Ethnic Cleansing of Palestine

“Kanazi’s haunting poems are not written to be consumed. They reserve a place in one’s conscience, in one’s memory, and — hopefully — in one’s praxis.”

Remi Kanazi is a poet, writer, and organizer based in New York City. He is the author of Poetic Injustice: Writings on Resistance and Palestine and the editor of Poets For Palestine. His political commentary has been featured by news outlets throughout the world, including Salon, Al Jazeera English, and BBC Radio. Kanazi has toured hundreds of venues across the United States, Canada, Europe and the Middle East, and he has appeared in the Palestine Festival of Literature as well as Poetry International. He is a Lannan Residency Fellow and an Advisory Committee member for the Palestinian Campaign for the Academic and Cultural Boycott of Israel.