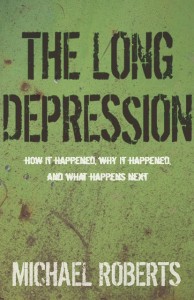 THE LONG DEPRESSION
How it Happened, Why It Happened, and What Happens Next

Setting out from an unapologetically Marxist perspective, The Long Depression argues that the global economy remains in the throes of a depression. Making the case that the profitability of capital is too low, and the debt built up before the Great Recession too high, leading radical economist Michael Roberts persuasively presents his case that this depression will persist until the profitability of capital is restored through yet another slump.

“A coherent, well-argued and informed book accomplishing many tasks.”

“This book is a tour de force analysis of the current global economic crisis and the preconditions and prospects for recovery in the years ahead. Based largely on empirical data and Marx’s theory of the falling rate of profit, Roberts argues that the world economy is in a long depression due to a falling rate of profit and a massive increase of debt. He argues further that a full recovery and a return to more prosperous conditions requires a prior even more severe depression, characterized by widespread bankruptcies, which would devalue capital and restore the rate of profit and would also wipe out much of the debt. He argues that a much better alternative would be to wipe out capitalism and construct a more democratic and egalitarian economy that is not vulnerable to recurring depressions.”

“With great clarity, Michael Roberts explains capitalism’s necessary proneness to profound economic crises and surveys the course of the current and previous depressions. Extensive use of empirical evidence, very accessibly presented, make his own main, Marxist argument and refutations of rival explanations persuasive. This book is at once an engaging read and a powerful political weapon.”

“Since the global economic crisis, Michael Roberts’s blog has become the indispensable source for those on the left seeking to understand and challenge capitalism. This book presents, with admirable clarity, the ideas drawn from Marxist political economy upon which his analysis rests. Anyone who wants to understand how we ended up here, where we are going, and what we should do about it must read The Long Depression.”

“Michael Roberts has established himself as one of the foremost bloggers and theoreticians of classical Marxism. Here he takes on the economic orthodoxy, both Keynesian and neoclassical, as to the causes of the Great Recession and of depressions in capitalism going back to the nineteenth century. [While] ‘the new normal’ and ‘secular stagnation’ have be[come] clichés rather than explanations for the slow growth in the world economy since the 2008 crash, Michael Roberts reaches deep into the history of capitalism to set out a Marxist explanation for recent developments.”

“The Long Depression is an impressive review of the global economic crisis. Marshaling a wide range of evidence, Michael Roberts counters the facile explanations of establishment commentators and many ‘alternative’ economists, showing instead how the origins of this crisis, and other historical examples, have clear links to declining capitalist profitability. Covering a wide range of topics, from stagnant productivity growth and high unemployment to the prospects for the BRICS countries, robots, and climate change, this book will educate readers about the outlook for capitalism today.”

Tony Norfield, author of The City: London and the Global Power of Finance

Michael Roberts has worked as an economist for over 30 years in the City of London financial centre. He is the author of The Great Recession: a Marxist View, published in 2009.