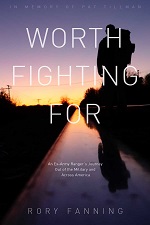 Pat Tillman’s death by friendly fire was covered up just days before his comrade Rory Fanning — who served in the same unit as Tillmann — left the Army Rangers as a conscientious objector. Disquieted by his tours in Afghanistan, Fanning sets out to honor Tillman’s legacy by crossing the United States on foot.

Told with page-turning style, humor, and warmth, Worth Fighting For explores the emotional and social consequences of rejecting the mission of one of the most elite fighting forces in the world. It is only through the generous, and colorful people Fanning meets and the history he discovers that he learns to live again.

“You set out on foot to find things that can be found no other way: your country, yourself, your sense of direction in the most practical and metaphysical selves. In this book Rory Fanning, a young soldier back from the wars, shares the results of his odyssey with those of us who have not walked 3,000 miles through wild places and rough weather. His encounters with Americans who might be described as ordinary but are often extraordinary and with himself and the places and their historical backstories make great reading (and maybe most of us are on some version of this quest, whether we know it or not).”

Rebecca Solnit, author of Wanderlust: A History of Walking

“You can measure America’s glorification of all things military by the depth of US Ranger veteran Rory Fanning’s feeling on becoming a conscientious objector that he has let his country down. He walks coast to coast to serve a cause, to find himself, and to imagine a better America fit for all the good people he meets along the way and all the good soldiers lost. His hard journey changes him, and it may change you too.”

Ann Jones, author, They Were Soldiers

“Rory Fanning’s odyssey is more than a walk across America. It is a gripping story of one young man’s intellectual journey from eager soldier to skeptical radical, a look at not only the physical immenseness of the country, its small towns and highways, but into the enormity of its past, the hidden sins and unredeemed failings of the United States. The reader is there along with Rory, walking every step, as challenging and rewarding experience for us as it was for him.”

“Fanning combines memoir, travelogue, political tract, and history lesson in this engaging account of his 3,000-mile solo walk from Virginia to California to raise money for the Pat Tillman Foundation. … Fanning’s descriptions of the hardships and highlights of the trip comprise the bulk of the book, and he infuses his left-wing politics into a narrative peppered with historical tidbits, most of which describe less-than-honorable moments in American history, such as the terrorist actions of the Ku Klux Klan and the nation’s Indian removal policies. What stands out most, though, is the selflessness and generosity — which come in the form of stories, hospitality, and donations for the foundation — of the people Fanning encountered during his journey.”

“Blending a story of the road in the tradition of Kerouac with some politics and his search for meaning to a life after battle, Rory Fanning has composed an absorbing narrative. The writing is concise and heartfelt. The experiences he shares reveal something too many of us often forget — that the men and women in the imperial military are more than just uniforms and weapons; more than pawns to be used by a power structure that needs war to survive; and much more than so many uniforms to be manipulated by the media at sporting events and TV specials serving that power structure. The politics are subtle and personal; and ultimately an indictment of that power structure by a man who served it willingly and with conviction — until he came up against its ugly truth.”

“Partly an evocation of ‘the bloody birth of the nation I now walked through’ and its often troubled history, part memoir of the author’s transformation from conservative Christian soldier to radical atheist and pacifist, part indictment of a foreign policy in which ‘Iraq felt like a bait-and-switch — and a betrayal.’ But mostly it’s about the people he met in the small towns he visited and the encouragement they gave him.”

“Rory Fanning’s transformation from soldier to peace pilgrim is a moving tale told with passion and eloquence. Long after the shooting stops, the soldiers who fight our wars are too often left to fight their personal battles alone. Fanning transforms his disillusionment with war and the military and strikes out for the country on a timeless journey of discovery. As he he traverses America on foot, he finds the radical heartbeat of a nation and builds bridges to people and places that have been left behind. This is a searing, honest, and ultimately hopeful tale of traveling a road from war to peace and justice.”

“Rory Fanning’s transformation from soldier to peace pilgrim is a moving tale told with passion and eloquence. Long after the shooting stops, the soldiers who fight our wars are too often left to fight their personal battles alone. Fanning transforms his disillusionment with war and the military and strikes out for the country on a timeless journey of discovery. As he he traverses America on foot, he finds the radical heartbeat of a nation and builds bridges to people and places that have been left behind. This is a searing, honest, and ultimately hopeful tale of traveling a road from war to peace and justice.”

David Goodman, co-author, Standing Up to the Madness

“I recommend [this] book enthusiastically … a tale told with wisdom, erudition, kindness, humor, humility, and generosity of which I think Tillman might have been proud.”

“Worth Fighting For takes us on a journey that will live inside you long after you finish the book. It is not only the physical journey that you make with Fanning as he walks across the country, but it’s the psychological, political and spiritual journey that you accompany him on as well, as he makes sense of his experience in the U.S. military through the lens of the incredible people and history he interacts with on his trek from the Atlantic to the Pacific. With each step and every page, we experience the evolving clarity of Fanning’s politics, worldview, and purpose in life.”

Jen Marlowe, author of I am Troy Davis and The Hour of Sunlight: One Palestinian’s Journey from Prisoner to Peacemaker

“The possibility of change is central to Fanning’s message. The experience of war and leaving the military had a huge impact on Fanning: ‘I have gone from a devout Christian to an atheist and from a conservative Republican to a socialist. My time in the military and the cover-up of Pat’s death led me down a road that challenged the core of who I was. I began to question everything — and ended up here.’ What Fanning demonstrates is the thin line between people’s support for their rulers’ ideas and interests, and their rejection of it all. The possibility of social transformation lies in this ambiguity. The right wing might seem to be in the ascendant right now in the US as in Britain, but its hold upon the consciousness of millions is demonstrably a fragile one, and quite different ideas lie untapped beneath the surface.”

Rory Fanning walked across the United States for the Pat Tillman Foundation in 2008-2009, following two deployments to Afghanistan with the 2nd Army Ranger Battalion. He is a housing activist living in Chicago, Illinois. Rory works for Haymarket Books and this is his first book.