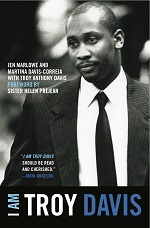 I AM TROY DAVIS

By Jen Marlowe and Martina Davis-Correia

With a foreword by Sister Helen Prejean

On September 21, 2011 Troy Anthony Davis was put to death by the State of Georgia. Davis’ execution was protested by hundreds of thousands of people across the globe, and Pope Benedict XVI, President Jimmy Carter, and 51 members of Congress all appealed for clemency. How did one man capture the world’s imagination, and become the iconic face for the campaign to end the death penalty?

I Am Troy Davis, coauthored by Jen Marlowe and Davis’ sister Martina, tells the intimate story of an ordinary man caught up in an inexorable tragedy. From his childhood in racially-charged Savannah; to the confused events that led to the 1989 shooting of a police officer; to Davis’ sudden arrest, conviction, and two-decade fight to prove his innocence; I Am Troy Davis takes us inside a broken legal system where life and death hangs in the balance. It is also an inspiring testament to the unbreakable bond of family, to the resilience of love, and that even when you reach the end of justice, voices from across the world will rise together in chorus and proclaim, “I am Troy Davis,” I stand with you.

“Here is a shout for human rights and for the abolition of the death penalty. This book, I Am Troy Davis, should be read and cherished. It will inspire courage in the heart of those who are willing to use their efforts to save lives and increase the quality of life for all people.”

“Like Trayvon Martin’s monumental murder, the execution of Troy Davis was a historic awakening for this country — an awakening of the deadly consequences of white supremacy. Don’t miss this book!”

“Read this book about Martina Davis-Correia and Troy Anthony Davis. The lives of this sister and brother were tragically cut short, one by cancer, the other through a cruel injection of a lethal chemical cocktail in the final act of a profoundly unjust criminal justice system. This book captures their unflagging courage in confronting the challenges thrust upon them. More than history, more than eulogy, I Am Troy Davis is an urgent call to action.”

“Martina and Troy are heroes from a family of heroes. This story of their lives is also a call to action. It asks each of us to pick up where they left off by ending the death penalty once and for all so the risk of executing an innocent person is finally eliminated in America.”

“I Am Troy Davis is a painful yet very important book, one that will bring you face to face with the human impact of the death penalty system, prompt you to think deeply about the flaws in our criminal justice system, and inspire you to stand with all those who have been wrongfully placed on death row.”

“I Am Troy Davis is heart stopping proof that the death penalty didn’t just kill an innocent Troy Davis and break and bury his gorgeous family, but it charred the soul of America. This book will devastate you, piss you off and then inspire you to work with your life to the end the death penalty forever.”

“Riveting … essential for those interested in the U.S. justice system in general and the death penalty in particular.”

“The extraordinary struggle for the life of Troy Davis that helped shake public consciousness about the death penalty was possible because the Davises invited the world to be part of their family. I Am Troy Davis takes readers on the journey of a remarkable family whose faith, love, integrity, and convictions propelled their fight for their loved one and a larger cause. Jen Marlowe’s careful and sensitive collaboration with the Davises has yielded a narrative that will surely inspire readers to pick up the torch that Martina Davis Correia so bravely carried for social justice and human dignity with every ounce of her being and every day of her life.”

“Martina Correia’s heroic fight to save her brother’s life while battling for her own serves as a powerful testament for activists. In finishing this book, Jen Marlowe has fulfilled a promise, ensuring that our memories of Troy and Martina – and the lessons they taught us – live on.”

“A must-read book. The searing, heartbreaking story of a strong and loving family caught in the vortex of a dysfunctional criminal justice system.”

Jen Marlowe, a Seattle-based human rights activist, writer, and filmmaker, is the author of The Hour of Sunlight: One Palestinian’s Journey from Prisoner to Peacemaker and Darfur Diaries: Stories of Survival. Jen’s award-winning documentary films include One Family in Gaza, Rebuilding Hope: Sudan’s Lost Boys Return Home and Darfur Diaries.