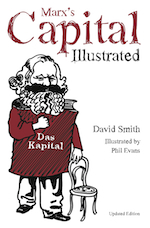 Imagine Karl Marx as a cartoonist, ready to set the record straight about his much maligned classic, Das Kapital. Impossibly difficult? Not in the least. Hopelessly outdated? Far from it. Though first published in 1867, Capital remains keenly relevant. Society continues to run on investment and profit, labor and technology. And predictions that once might have seemed rash — global economic crisis, societies nearing bankruptcy — are now simply facts. Capital remains the fullest attempt to explain these facts, and Marx’s Capital Illustrated brings this attempt to vibrant life, proceeding all the way from the ABCs to the pertinence of Marx’s theory of crisis for today’s global woes.

Fresh, funny, and copiously illustrated, this book is for everyone who wants better insight into Capital and capitalism. Readers of Marx, unite! You have found your starting point.

“[Marx’s Kapital Illustrated is] valuable and in some respects more so than all the interpretations and popularizations I have read.”

“[Marx’s Capital Illustrated] is very, very good, a brilliant exposition and a really creative relationship between image and explanation.”

David N. Smith is the editor of a forthcoming English-language volume of Marx’s Notes on Global Capitalism and Non-Western Culture for Yale University Press. His publications include articles in many scholarly journals, including Sociological Theory, Rethinking Marxism, The American Psychologist, and Current Perspectives in Social Theory.

Phil Evans is a longtime political cartoonist based in England. He has illustrated Marx’s Kapital for Beginners and Understanding Economics, among many other books.