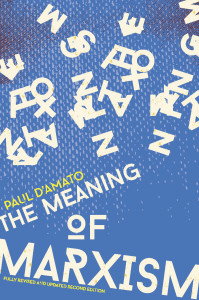 THE MEANING OF MARXISM
Updated Edition

It is fashionable for pundits to declare every so often that Marxism is dead. As the late socialist author Daniel Singer aptly put it, their aim “is to doom as impossible a radical, fundamental transformation of existing society.”

But you can’t keep a good theory down. The poverty, class inequality, war and environmental degradation that today’s globalized capitalist system creates on an ever-expanding scale raises questions for which Marxism still offers fresh and relevant answers.

This book is a lively and accessible introduction to the ideas of Karl Marx, as well as other key Marxists, with historical and contemporary examples. The Meaning of Marxism shows that a “radical, fundamental transformation of existing society” is indeed not only possible, but urgently necessary.

“Marx’s ideas remain crucial for comprehending the modern world, and no one does a better job of explaining them and showing how to apply them to contemporary issues than Paul D’Amato. This book is a treasury of powerful arguments illustrating the continuing relevance of class politics. A superb introduction to the Marxist method.”

Phil Gasper, editor of The Communist Manifesto: A Road Map to History’s Most Important Political Document

“There is an expression that Marxism is not merely a theory but a guide to action. Paul Damato’s new book, The Meaning of Marxism, represents the best of that tradition. In his able hands, Marxist politics come alive and leap before us, pointing a way toward a better world. It’s a knockout.”

“When it comes to thinking about the continuing relevance of Marxist principles and perspectives for today’s political struggles, Paul D’Amato is one of the best writers around. Every progressive activist has something to learn from this volume.”

“Paul D’Amato reintroduces us to the classical Marxist tradition, showing how revolutionary socialist ideas remain the most powerful tools for changing the upside-down world of 21st-century capitalism.”

Paul D’Amato is the associate editor of the International Socialist Review. His writing has appeared in CounterPunch, Socialist Worker and Selves and Others.