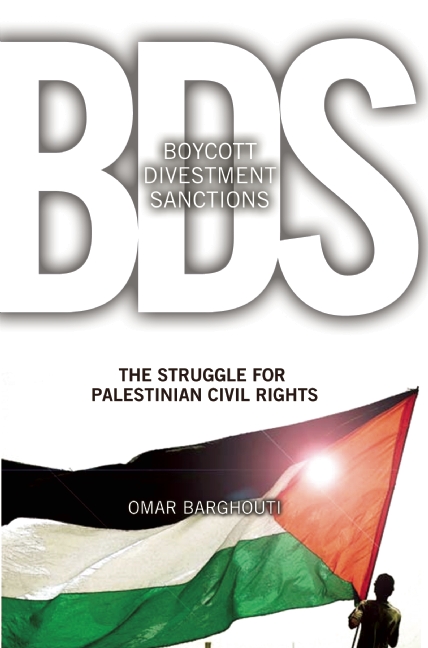 International boycott, divestment, and sanctions (BDS) efforts helped topple South Africa’s brutal apartheid regime. In this urgent book, Omar Barghouti makes the case for a rights-based BDS campaign to stop Israel’s rapacious occupation, colonization, and apartheid against the Palestinian people. This considered, convincing collection contributes to the growing debate on Israel’s violations of international law and points the way forward to a united global civil society movement for freedom, justice, self-determination, and equality for all.

“No one has done more to build the intellectual, legal, and moral case for BDS than Omar Barghouti. The global Palestinian solidarity movement has been transformed and is on the cusp of major breakthroughs.”

“Barghouti explains with lucidity, passion, and unrivaled intelligence … that bringing an end to apartheid in Palestine and seeing justice and equality for all the people who live there is not a distant dream but a reality we can bring about in the next few years using BDS.”

Ali Abunimah, author of One Country and co-founder of the Electronic Intifada

“I have been to Palestine where I’ve witnessed the racially segregated housing and the humiliation of Palestinians at military roadblocks. I can’t help but remember the conditions we experienced in South Africa under apartheid. We could not have achieved our freedom without the help of people around the world using the nonviolent means of boycotts and divestment to compel governments and institutions to withdraw their support for the apartheid regime. Omar Barghouti’s lucid and morally compelling book is perfectly timed to make a major contribution to this urgently needed global campaign for justice, freedom and peace.”

“Those who think they are free to disregard international law because they are powerful … are dead wrong. At the same time it is the tolerance of such behavior that has led Israel to believe that they can literally get away with murder. … Omar Barghouti’s book…is timely and responsibly written by a man who understands that creative and relentless nonviolence is the only way out of the dire situation in which Palestine, and our entire world for that matter, finds itself.”

“For the first time, we have in front of us a succinct and poignant case made for the BDS strategy vis-à-vis Israel. There is no one better placed to make this case than Omar Barghouti, as this book shows clearly…. This is a must read for anyone interested in, and committed to, the Palestine cause, regardless of their particular stance on the BDS strategy.”

Ilan Pappé, University of Exeter, and co-author of Gaza in Crisis

“Barghouti reminds us what public responsibility entails, and we are lucky to have his re lentless and intelligent analysis and argument. There is no more comprehensive and persuasive case than his for boycott, divestment, and sanctions to end the Israeli occupation and establish the ethical claim of Palestinian rights.”

“Barghouti is the future. He is intelligent, empowered, and nonviolent. He is completely impressive. It would help Americans to see such a picture of Palestinian political engagement when they have such a distorted image of who Palestinians are. Some day they will know him.”

Phillip Weiss, co-founder of Mondoweiss: The War of Ideas in the Middle East

“The ABC for internationalist support for Palestine is BDS. And the boycott, divestment, and sanctions campaign against Israeli cruelty and injustice is gaining in significance and scope. Like the anti-apartheid movement against racist South Africa, BDS is helping to make a tremendous difference in what has been a most difficult struggle for human rights and the right of a colonized and dispossessed people to national self-determination. This inspiring book is a weapon in a noble struggle in which all right-thinking people can play a part.”

“I commend this excellent book by Omar Barghouti.…It challenges the international community to support the BDS campaign until the entire Palestinian people can exercise their inalienable rights to freedom and self-determination and until Israel fully complies with its obligations under international law. BDS is a call to refuse to be silent in the face of military occupation of the Palestinian people by the Israeli regime, apartheid, and colonialism. BDS is a nonviolent way in which each of us and our governments can follow our conscience and rightful moral and legal responsibility and act now to save Palestinian lives by demanding that the Israeli apartheid regime give justice and equality to all.”

“When powerful governments will not act, ordinary people must take the lead. … Essential reading for all who care about justice and the plight of an oppressed people.”

“This is a book about the political actions necessary to hinder and finally to stop the Israeli state machine that is operating every day to eliminate the Palestinian people. It is like an engineer’s report, not a sermon. Read it, decide, and then act.”

Omar Barghouti is an independent Palestinian commentator and human rights activist. He is a founding member of the Palestinian Campaign for the Academic and Cultural Boycott of Israel (PACBI) and the Palestinian Civil Society Boycott, Divestment and Sanctions (BDS) campaign against Israel. He holds a bachelor’s and master’s degrees in electrical engineering from Columbia University, NY, and a master’s degree in philosophy (ethics) from Tel Aviv University.