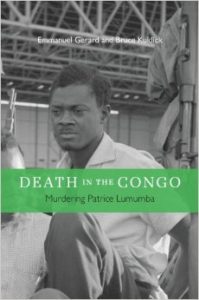 Death in the Congo is a gripping account of a murder that became one of the defining events in postcolonial African history. It is no less the story of the untimely death of a national dream, a hope-filled vision very different from what the war-ravaged Democratic Republic of the Congo became in the second half of the twentieth century.

When Belgium relinquished colonial control in June 1960, a charismatic thirty-five-year-old African nationalist, Patrice Lumumba, became prime minister of the new republic. Yet stability immediately broke down. A mutinous Congolese Army spread havoc, while Katanga Province in southeast Congo seceded altogether. Belgium dispatched its military to protect its citizens, and the United Nations soon intervened with its own peacekeeping troops. Meanwhile, behind the scenes, both the Soviet Union and the United States maneuvered to turn the crisis to their Cold War advantage. A coup in September, secretly aided by the UN, toppled Lumumba’s government. In January 1961, armed men drove Lumumba to a secluded corner of the Katanga bush, stood him up beside a hastily dug grave, and shot him. His rule as Africa’s first democratically elected leader had lasted ten weeks.

More than fifty years later, the murky circumstances and tragic symbolism of Lumumba’s assassination still trouble many people around the world. Emmanuel Gerard and Bruce Kuklick pursue events through a web of international politics, revealing a tangled history in which many people—black and white, well-meaning and ruthless, African, European, and American—bear responsibility for this crime.

“In Death in the Congo: Murdering Patrice Lumumba, Emmanuel Gerard and Bruce Kuklick open a wide aperture onto one of the most charged historical whodunits of the 20th century… It lays bare the entangled international actors that conspired to seal Lumumba’s fate and that of the independent Congolese nation… Death in the Congo is a riveting account.”

“Death in the Congo is history for grown-ups, lucid and unsparing, alert to our infinite capacity for deceit and self-deception.”

“The story of Patrice Lumumba’s death is fascinating because it seems emblematic of the Cold War–era decolonization of Africa… What is distinctive and new in this very readable account is the authors’ unrelentingly negative portraits of all the actors involved. No one emerges unscathed: not the bumbling Congolese, not the Cold War-crazed Americans, not the petulant Europeans—and, worst of all, not even Lumumba himself, whom Gerard and Kuklick portray as a gifted speaker but also a self-promoter who was generally clueless about the exercise of power.”

“While political violence is no stranger to the Congo, what happened to Lumumba in the early 1960s still matters…. And this is where a book as calm, clear and authoritative as Emmanuel Gerard’s and Bruce Kuklick’s Death in the Congo adds true value. Novelists and filmmakers have all had a go at the Lumumba story, but here at last is history-writing at its most powerful: a work that reads in part like a charge sheet for a war-crimes prosecution and in part like a Shakespearian tragedy with farce thrown in…. But the book’s true importance lies in spelling out the roles of the various powers involved, notably America and Belgium. Individual prosecutions are now unrealistic, but Death in the Congo demonstrates (something Tony Blair and George W. Bush might ponder) that it is never too late to investigate political decisions that lead to manipulation and murder.”

“[Gerard and Kuklick] have bravely taken on the most important and disturbing assassination of a democratically elected leader in modern times, and an event on a par with that of Archduke Franz Ferdinand for the mayhem and madness left in its wake… Rather than interpreting [Lumumba’s] downfall as the result of crude Cold War anti-communism, Gerard and Kuklick rightly argue that Cold War tensions were more contextual, feeding into a U.S. commitment to support Western interests and influence in post-colonial Africa; its sympathy for Nato and its Belgian secretary general; and the Eisenhower administration’s hatred of Lumumba.”

“A book about an old story that has new nuances and details for its readers, who should definitely include general readers, students still in search of the truth about the assassination, and, indeed, seasoned as well as amateur Africanists.”

“Death in the Congo captures a striking portrait of an international crisis in the early Cold War caused by one post-colonial nationalist’s rise to power. It meticulously details the way Patrice Lumumba was subsequently ousted and how his murder was encouraged by western powers. In many ways, it is a character study of the political leaders who instigated and backed Lumumba’s murder and the men in the lower ranks who carried it out.”

“Outstanding… This major work of scholarship succeeds in showing how the convergence of a complex mix of interests and motivations resulted in Lumumba’s murder.”

“The authors provide wealth of detail in this worthy primer to the events that plunged the nation into decades of dictatorship under Joseph Mobuto (Mobutu Sese Seko).”

Bruce Kuklick is Nichols Professor of American History Emeritus at the University of Pennsylvania. His historical interests are broadly in the political, diplomatic, and intellectual history of the United States; and in the philosophy of history. He has won all the major teaching prizes given by the University, including the Senior Class Award. In 2004 he was elected to the American Philosophical Society. He has written a dozen books, including Blind Oracles: Intellectuals and War from Kennan to Kissinger published by Princeton University Press in 2006; a biography of African American philosopher William Fontaine, Black Philosopher; White Academy, published by the University of Pennsylvania Press in 2008; and a political history of America, One Nation Under God, published by Palgrave-MacMillan in 2009.

Emmanuel Gerard is a full professor at the Faculty of Social Sciences, Centre for Political Research, at KU Leuven – Univerisity of Leuven in Belgium. His main research interests are in the field of contemporary history. Gerard has been general director of HIVA Research Institute for Work and Society since 2013, and president of KADOC Documentation and Research Center on Religion, Culture and Society since 2007. He is Curator of the Flemish Parliament Visitor’s centre and Chairholder of the Gülen Chair for Intercultural Studies. He was Chair of the Political Science Departement from 1993 until 2000, and Dean of the Faculty of Social Sciences from 2003 until 2010. Gerard is the author of many books and publications.