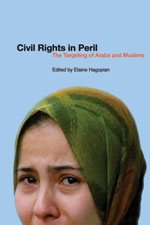 CIVIL RIGHTS IN PERIL
The Targeting of Arabs and Muslims

Muslims and Arab-Americans are increasingly under attack as a result of the U.S. “war on terror” – at home, as well as abroad. Since the tragic events of September 11, Arab and Muslim Americans have faced a major assault on their civil liberties.

“Elaine Hagopian, one of the country’s most respected analysts of Middle East affairs, has brought together a group of astute commentators, who give us a refreshingly critical view of the current demonization of Muslims and Arabs. What she and the others make clear is the deadly connection between this phenomenon and U.S. behavior in the Middle East.”

– Howard Zinn, author, A People’s History of the United States

“The ‘war on terror’ re-declared by the Bush administration after 9/11 has provided the rhetorical framework for foreign and domestic policies grounded in quite different commitments. These careful and informative inquiries provide much insight into some of the central issues of contemporary world affairs, at home and abroad.”

“Since September 11, U.S. media and popular culture have treated Arabs and Muslims as fanatics, terrorists, and suspects: this volume treats them as human beings. These are the forgotten victims of September 11, whose rights have been curtailed, activities monitored, and charities closed down or suppressed.”

Elaine Hagopian is professor emeritus of sociology at Simmons College.